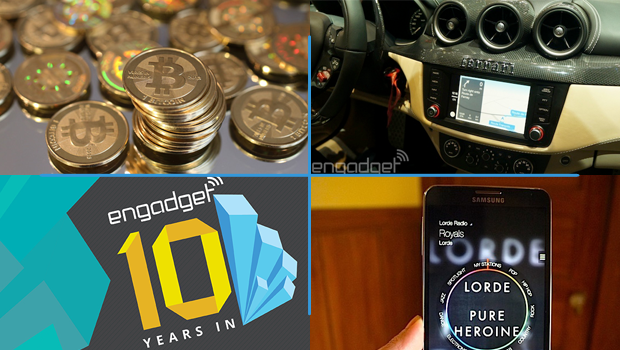 You might say the week is never really done in consumer technology news. Your workweek, however, hopefully draws to a close at some point. This is the Weekly Roundup on Engadget, a quick peek back at the top headlines for the past seven days -- all handpicked by the editors here at the site. Click on through the break, and enjoy. Ever heard of Satoshi Nakamoto? He's the mysterious individual said to be the creator of Bitcoin, and Newsweek claims to have found him. Indeed, a man by the name of Satoshi Nakamoto lives in California, but whether he's really the father of the digital currency is still up for debate. This week at the Geneva Auto Show, Apple unveiled its new in-car interface called CarPlay. So naturally, Engadget's Matt Brian hopped into a nearby Ferrari for a test run. Read on for our video and hands-on photos. Since March 2, 2004, Engadget has been keeping people from all four corners of the globe in touch with the latest and greatest gadget news. And wow... what a ride it's been. Whether you're a casual techie or hardcore early adopter, we hope you'll join us in celebrating Engadget's 10th anniversary! Samsung's getting its own piece of the internet radio pie with Milk. Milk Music, to be exact. The company's new adless music service brings a unique, Slacker-powered way to explore online radio. The catch? It's only available for Galaxy devices.

In this article: apple, apple carplay, bitcoin, carplay, engadget10th, milk music, Satoshi Nakamoto, SatoshiNakamoto, sxsw, twr
All products recommended by Engadget are selected by our editorial team, independent of our parent company. Some of our stories include affiliate links. If you buy something through one of these links, we may earn an affiliate commission.