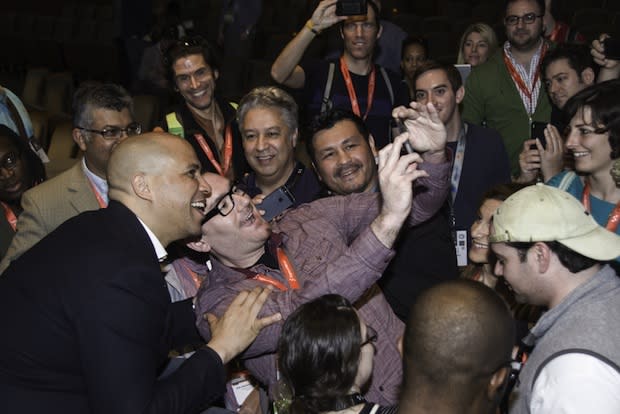 We're live on the ground at South By Southwest (#SXSW for short), the annual event that brings together everyone and anyone who's invested in the interactive arts. Those artists include the minds behind emerging startups (like Twitter was here in 2007), as well as established innovators like Mark Cuban and even Grumpy Cat.

We're already off to a great start: we've seen a man get stunned by the Chaotic Unmanned Personal Intercept Drone and had a chance to punch virtual sharks with the Oculus Rift and Leap Motion. But, there's more to come over the next few days, including riding MarioKart in real life, separate virtual conversations with Edward Snowden and Julian Assange, Shaq and much more.

Here's how to keep up with us at SXSW, after the break.

You'll find our familiar collection of posts coming out of the events we cover right here.

You can follow us and our team on the ground at these handles below:

We'll update our Facebook and Google+ pages with the latest news on Engadget. When we're out and about in Austin, we'll post pictures and videos to Instagram, as well as shorter videos to Vine.

[Thanks, SXSW for the headline picture, with this author and his selfie with now Senator Cory Booker.]

In this article: hdpostcross, mobilepostcross, poll, SouthBySouthwest, sxsw, sxsw2014, twitter, wedgies
All products recommended by Engadget are selected by our editorial team, independent of our parent company. Some of our stories include affiliate links. If you buy something through one of these links, we may earn an affiliate commission.