Party Bot decides who's on the guest list, what music to play 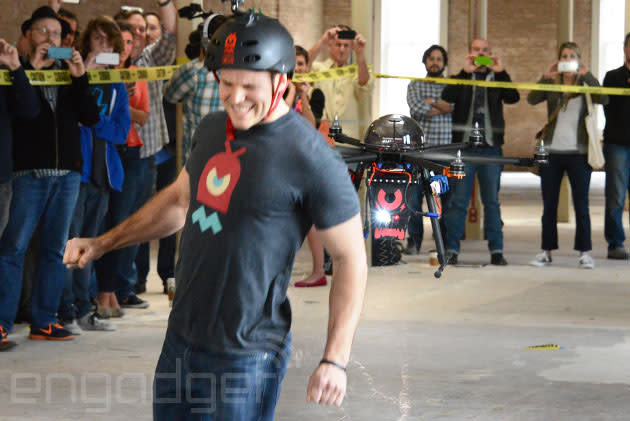 You're gonna want to steer clear of this CUPID. The Chaotic Unmanned Personal Intercept Drone, or "stun copter," can deliver 80,000 volts of pure projectile terror directly into the skin of an ill-intentioned hoodlum. This is serious business for Chaotic Moon, the folks behind SharkPunch and the Pizza Hut touch table. The Austin-based design studio created the flying machine as a tech demo, but CUPID could be quickly brought to production whenever a personal security or law enforcement client sees fit. This prototype unit is based on a Tarot Hexacopter, originally designed to carry a digital SLR for video and aerial photo shoots. With a Phazzer Dragon on board, however, a few modifications made this an entirely different beast. The objective here isn't to have a copter autonomously wandering city streets, detaining suspects until the police arrive (though the device could theoretically handle such a task). Instead, due to legal requirements, the drone is operated by a pilot, who flies the craft manually, with a second person tasked with triggering the stun gun. Eventually, such a device could be used to aid police in subduing a suspect until officers are able to arrive on the scene. An embedded camera provides a live video feed to operators, who can evaluate the situation before deciding to strike. Since a public park demonstration would likely result in some pretty stirred-up locals, Chaotic Moon invited us up to its Austin offices for a closed-door session during SXSW.

Intern Jackson Sheehan volunteered to be CUPID's first human victim, and after a quick vitals check by an on-site paramedic, he was cleared for duty. The affair lasted just a hair over five seconds -- the device can stun several times in up to 10-second bursts, but the company's attorneys mandated that Chaotic Moon co-founder William Hurley (@Whurley) manually pull the plug after half that time. Sheehan was clearly subdued by the drone, falling onto safety mats against his will. He stood up shortly after, and was on his way after the paramedic removed the barbed leads from his back. We caught the whole ordeal on camera, of course; the video is embedded for your viewing pleasure just below.

In this article: chaoticmoon, copter, drone, drones, security, stun, stungun, sxsw, sxsw2014, taser, video
All products recommended by Engadget are selected by our editorial team, independent of our parent company. Some of our stories include affiliate links. If you buy something through one of these links, we may earn an affiliate commission.