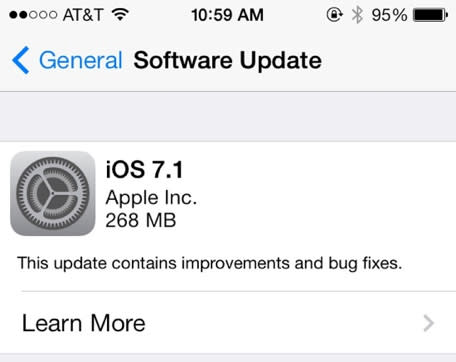 After a long bout of beta testing, Apple has released the iOS 7.1 update to the general public. This is the first major update for iOS 7 since it was released this past September.

7.1 brings a host of new features, from updated icons to an improved keyboard and phone dialer. If you've been waiting for CarPlay, formerly known as iPhone in the Car, you're in luck. iOS 7.1 brings the service to vehicles for the first time, creating an "eyes-free" experience that utilizes Siri's voice controls for accessing music, responding to incoming calls, and dictating text messages.

Users can look forward to new manual controls for Siri that allow you to hold down the Home button while you speak and release it when you're done, instead of letting Siri figure out when you're done speaking. Calendar has added the option to display events in month view, along with new country-specific holidays.

To update, simply head to your "software update" tool item in Settings > General > Software Update on your device, plug in your phone or tablet, and turn on your WiFi. You'll be all set in no time!

In this article: apps, iOS, ios 7.1, iPhone, software, update
All products recommended by Engadget are selected by our editorial team, independent of our parent company. Some of our stories include affiliate links. If you buy something through one of these links, we may earn an affiliate commission.