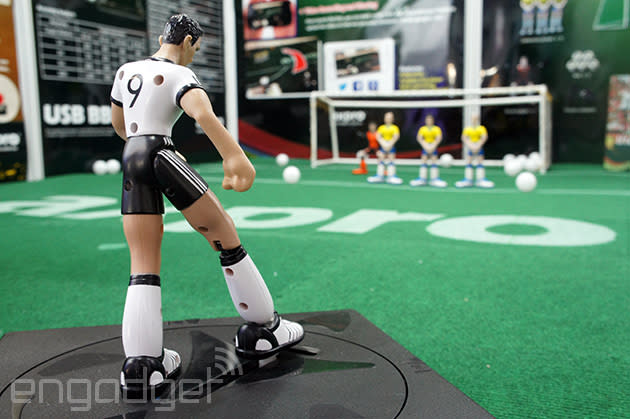 Axpro is a Taiwanese company that makes flash drives, so it's surprising to see it building app-connected toys like U14 Free Kick - a game that's a weird hybrid between Frujit Ninja, Subbuteo and Robot Football. Making Fruit Ninja-style swipes on the iOS app determines the power and direction of a free-kick made by a robotic footballer, in the hope of getting it up and over a defending wall. It's been designed for groups of soccerball fanatics who want to show off their ball-curving prowess without doing the real thing, and seems ideal for late night pub competitions. Unfortunately, it won't become commercially available until Axpro finds a distributor, so we might have to clip our nails and dust off that Subbuteo box after all. 11
Sharif Sakr received a yellow card for simulation during this report.
In this article: 2014, Axpro, CeBIT2014, football, hands-on, mobilepostcross, soccer, toy, U14 Free Kick, video
All products recommended by Engadget are selected by our editorial team, independent of our parent company. Some of our stories include affiliate links. If you buy something through one of these links, we may earn an affiliate commission.