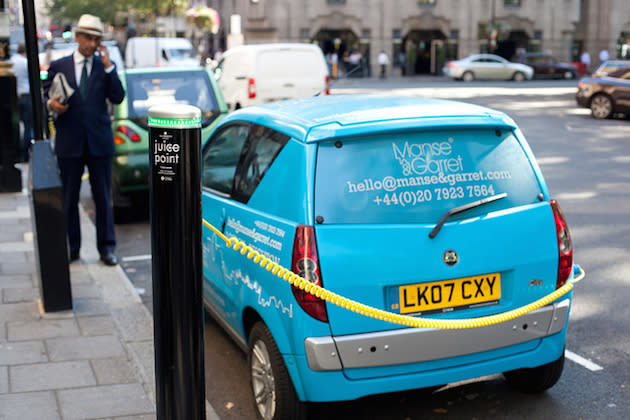 Electric cars have yet to wow British drivers, but that doesn't mean the government is ready to give up on putting more greener vehicles on UK streets. With help from a French billionaire, the city is set to become home to more than 3,000 electric hire cars and 6,000 charging points in the next two years, quadrupling the number of available outlets that are available today. It's all part of a £100 million investment by businessman Vincent Bollore, whose company won the rights to assist London Mayor Boris Johnson in getting 100,000 electric vehicles on the road and putting every resident within one mile of a charge point. While the charging network will be run for Transport for London, the car-sharing scheme is commercial. Bollore reckons around 100 "Bluecars" will be available by the end of the year, which can be rented using a smartphone app for £10 per hour (nearly twice as much as some petrol car services like ZipCar). While it's certainly no Tesla Supercharger network, we can expect EVs to suddenly become a lot more visible on the streets of Britain's capital city.

In this article: boris johnson, electric vehicle, ev, london, uk, uk-origin
All products recommended by Engadget are selected by our editorial team, independent of our parent company. Some of our stories include affiliate links. If you buy something through one of these links, we may earn an affiliate commission.