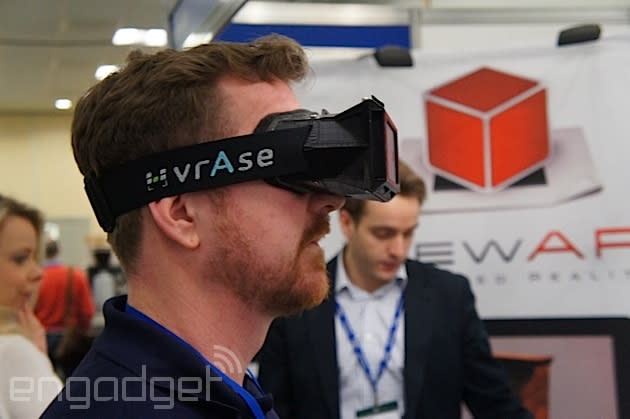 We'll admit it, when we first laid eyes on vrAse -- a smartphone case that gives your handset Oculus Rift-like functionality -- we were a bit... curious? The ambitious/ingenious project was launched on Kickstarter at the end of last year, and while it didn't get quite the huge sum that Oculus did, it captured enough imaginations to secure the money it needed. How does it work? An optimized app splits its output into two -- side by side. You then slide the phone into the headset/case which has a lens feeding into each eye, creating a large, 3D image. The hardware we saw was just a prototype, but final designs should be ready by summer. We also got to try it on!

In effect, the vrAse is creative use of existing hardware (your phone) and existing software techniques, with some barebones hardware that brings the it all together (the case). The first benefit of this approach is the cost, the vrAse (think VR, case) will retail for around $100 once it fully launches later this year. Another benefit is that by offloading the heavy lifting to your phone, the brains of the operation is effectively endlessly upgradeable. Update your phone, you have a new engine in the machine. Other perks of this method mean you can also benefit from other features that come with a phone such as the camera or microphone. In our quick demo with the vrAse, we were shown a demo that sits you in a roller coaster. The phone being used was a Galaxy Note, so one with a larger screen, but we were surprised by how immersive the experience was. As we rode around the virtual landscape, we genuinely felt the urge to lean left and right along with it -- and the anticipation of a loop the loop was very real! Another demo we were shown used the phone's camera -- so that we could actually see the real world -- but the software placed virtual furniture in the room that we could walk around and even change the color of with a voice command to the phone. Apps aren't limited to working with the hardware either, games, for example, can have an optional 2D mode for when you just want to play on the phone directly.

The experience is perhaps not as fully immersive/slick feeling as the Oculus Rift due to the inherent compromises that come with an open hardware platform, and decentralized software (it's, of course, open to iOS, Android, Windows Phone and beyond). This should improve, however, once the final hardware is comes to market, and the goal posts become a little more fixed. We were shown how the retail unit will look, but were unable to take photos. As you can imagine, it's somewhat more attractive than the prototype we saw, and very much in keeping with similar headsets we've seen of late.

In this article: headset, mobilepostcross, virtual reality, vr, vrase
All products recommended by Engadget are selected by our editorial team, independent of our parent company. Some of our stories include affiliate links. If you buy something through one of these links, we may earn an affiliate commission.