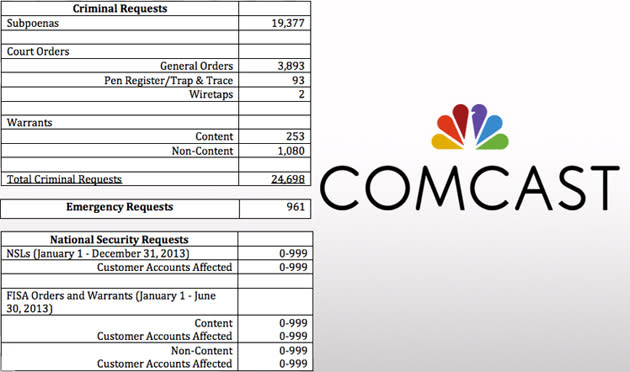 Comcast must not want to feel left out as telcos begin publishing regular government data request statistics -- the cable giant has just posted its first transparency report. The document reveals that Comcast obeyed more than 25,000 government demands for info during 2013, including 24,698 criminal requests (such as warrants) and 961 emergency requests. There isn't as much detail for national security requests due to federal rules, but the report shows that Comcast isn't under quite as much scrutiny as its peers. The provider received less than 1,000 national security letters last year, while Verizon reported between 1,000 and 1,999; AT&T says it got between 2,000 and 2,999. The differences aren't surprising when Comcast has no cellular customers these days. However, those numbers are bound to grow if Comcast succeeds in buying Time Warner Cable.

In this article: comcast, fisa, hdpostcross, internet, isp, nationalsecurityletter, privacy, security, surveillance, television, transparency, transparencyreport, tv
All products recommended by Engadget are selected by our editorial team, independent of our parent company. Some of our stories include affiliate links. If you buy something through one of these links, we may earn an affiliate commission.