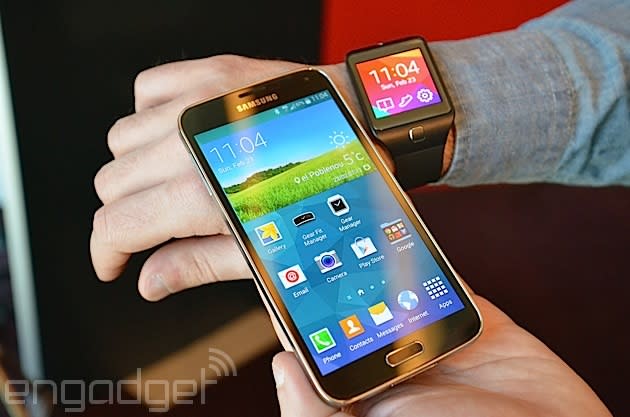 Sprint's getting the Galaxy S5, too. And like fellow underdog T-Mobile, the carrier plans to offer Samsung's flagship handset for no dinero upfront on its Easy Pay plan. Which means, you still have to pay, but just in 24 monthly increments. Those pre-orders begin today for folks visiting Sprint's retail stores -- that is if you can still find one that isn't shuttered -- and begin shipping on April 11th. And to sweeten the pot a little for those that aren't entirely sold on the GS5, Sprint's even tossing in zippy 4G LTE for subs that live in Spark markets, as well as a "free" Galaxy Tab 3 7.0 for qualifying Framily (ugh, that word!) members. Though note you'll have to open a separate two-year agreement to get it.

But there's even more Samsung gadgetry on the way. On the same day the GS5 becomes available, Sprint will also add Samsung's new line of Gear smartwatches -- the Gear 2/Gear 2 Neo and Gear Fit -- to its portfolio. As a relatively low-end impulse buy, you'll be able to get the Neo and Fit for $200, while the more "luxe" Gear 2 will go for $300.

In this article: galaxys5, gear2, gear2neo, gearfit, GS5, mobilepostcross, preorder, samsung, spark, sprint
All products recommended by Engadget are selected by our editorial team, independent of our parent company. Some of our stories include affiliate links. If you buy something through one of these links, we may earn an affiliate commission.