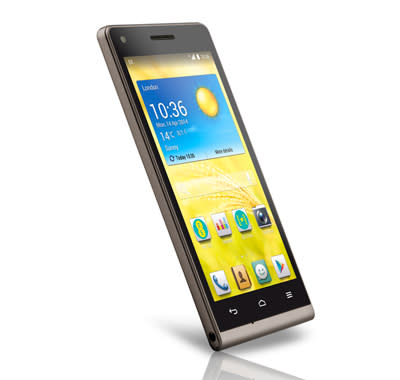 We got wind that EE was cooking up an own-brand smartphone for its 4G network a couple of weeks ago, and now the UK operator's ready to come clean about the device. It's called the Kestrel, and as we suspected, it'll offer the cheapest ride on EE's LTE network at £100 on pay-as-you-go (PAYG), or free from £14 per month on the new entry-level tariff, when it launches towards the end of April. Now, being £30 less on PAYG than Alcatel's One Touch Idol S (which is also free from £14 per month), a mixed-bag of specs was to be expected. On the plus side, it's packing a 1.2GHz quad-core Snapdragon 400 and as a Cat 4 handset, it's capable of maxing out the theoretical 150Mbps download speeds of EE's "Extra" plans. Not so enticing is the 4.5-inch qHD display (960 x 540), and beyond that, we're looking at 1GB of RAM, 8 gigs of storage (with a microSD slot for expansion), a 2,000mAh battery, 5-megapixel main camera and 1-megapixel front-facer. The Kestrel's running Android 4.3 Jelly Bean behind Huawei's Emotion UI, with bloatware comprising a couple of EE apps and "free games," as the spec sheet puts it. Curiously, Amazon's app suite is also pre-loaded on the device alongside Google's familiar services. We've had a very brief encounter with a prototype handset, which was pleasant enough with its angular styling and "graphite" tint. Further indication of Huawei's involvement as EE's ODM can be seen in the phone's curved bottom edge, which is fairly common to the Chinese company's own devices. According to EE, a homegrown handset was always part of the network's long-term plan -- one that doesn't stop with the Kestrel.

In fact, this is just the first in a series of planned devices bearing EE branding and named after British birds of prey. We don't need to tell you that the Kestrel is all about affordability, but it would now seem the only way is up. We don't know if some kind of own-brand flagship makes as much sense as a bargain offering, but we're happy to wait for the EE Barn Owl to be announced before passing any formal judgement.

In this article: 4g, 4glte, ee, eekestrel, emotionui, huawei, huawei kestrel, kestrel, lte, mobilepostcross, uk
All products recommended by Engadget are selected by our editorial team, independent of our parent company. Some of our stories include affiliate links. If you buy something through one of these links, we may earn an affiliate commission.