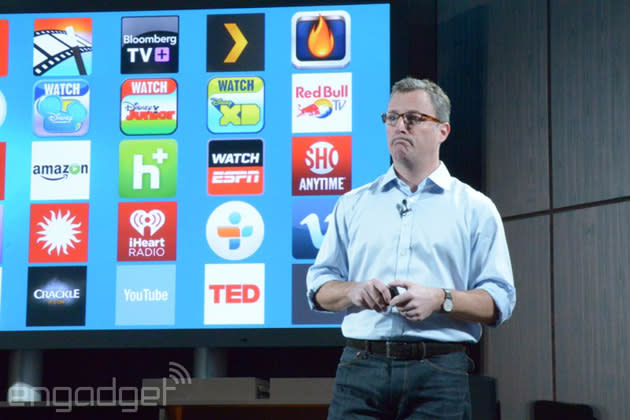 After announcing its new Fire TV set-top box today, Amazon naturally revealed a content lineup to go along with the $99 streaming device. That includes the new Amazon Video series we've been hearing about and TV shows it's signed up as Prime streaming exclusives. Amazon also announced several apps headed to the Fire TV: Showtime Anytime, Flixster, Netflix, YouTube, Hulu Plus, WatchESPN, Plex and many, many more. The Amazon listing has a deeper list on what's available, we'll have more information after we go hands-on.

Update: Amazon could not confirm that HBO Go is coming to the Fire TV, only saying "we're working to get more content." We checked with HBO, which said the service is not there and that there are no plans to add it at this time, a quote echoed by Ultraviolet-connected service Vudu.

In this article: amazon fire tv, amazonvideo2014, hbo go, hdpostcross
All products recommended by Engadget are selected by our editorial team, independent of our parent company. Some of our stories include affiliate links. If you buy something through one of these links, we may earn an affiliate commission.