Facebook may combine your News Feed and Stories into one carousel

Snapchat launches its first Lens that reacts to sound

Google's speeding up mobile web search results for all sites

Everything you love will die, especially in tech 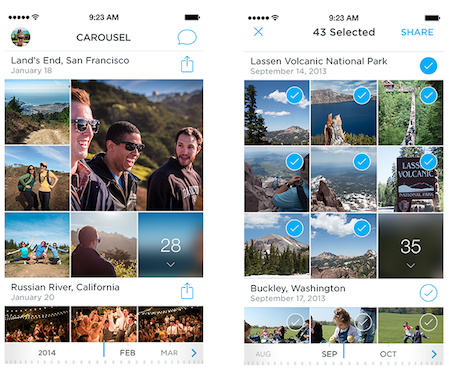 Dropbox wants to be the go-to source for sharing videos and photos online, and their new app seeks to make that familiar task even easier. Today the company launched Carousel, a fast new photo and video sharing app that allows users to quickly sort and find visual media files in their archives. Rather than having to search through folders for the image you want Carousel allows you to quickly view the files themselves.

Images stored via Carousel can be shared a number of ways, whether the recipient has Dropbox or not, including via email or even a phone number. Carousel can store as many files as you have space for with your Dropbox plan. Here's Carousel's launch video, which makes some intriguing promises regarding the speed of pulling up and finding media. You can download the iOS app here.

The company also announced that its enterprise-styled Dropbox for Business service is now open to all users. According to Dropbox, the service allows users to link their personal and business accounts to be managed in one neat area. Users with the service are given two separate folders, one for personal use and one for work.

This lets you quickly and easily switch between your personal and work files on any of your mobile devices. Below is a video Dropbox produced to explain all the benefits of Dropbox for Business. The news comes alongside the announcement that the company now has 275 million users, up from 200 million this past November.

In this article: carousel, cloud storage, dropbox, photography, storage
All products recommended by Engadget are selected by our editorial team, independent of our parent company. Some of our stories include affiliate links. If you buy something through one of these links, we may earn an affiliate commission.