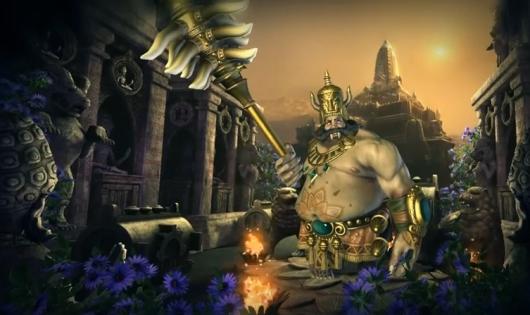 The Sleeping Giant, Kumbhakarna, is the latest god to enter into SMITE's cage match pantheon.

This Hindu god might not be the most nimble or even the most awake, but he has power nevertheless. Kumbhakarna doesn't die when he hits zero hit points; he falls asleep and eventually wakes up at 25% health. He can also throw back enemies, root bad guys with a smash, and... yawn for a mez. You can check out his moves in the god reveal after the break.

In this article: champion, class, f2p, free-to-play, god-reveal, hi-rez, hi-rez-studios, Kumbhakarna, moba, multiplayer-online-battle-arena, reveal, Smite, video
All products recommended by Engadget are selected by our editorial team, independent of our parent company. Some of our stories include affiliate links. If you buy something through one of these links, we may earn an affiliate commission.