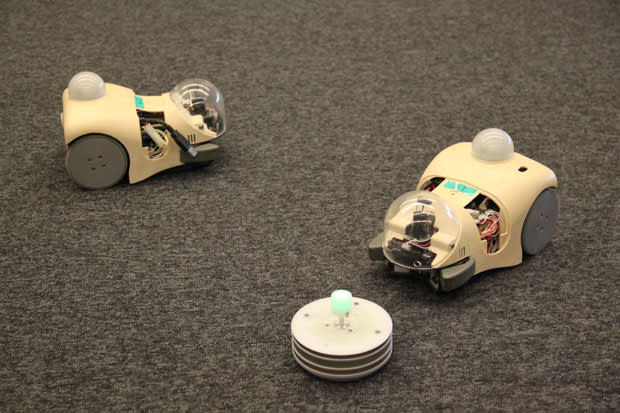 Studying evolution is tricky -- it's a process that happens over countless generations and thousands of years, but the men tasked with studying it live less than a century. Researchers at the Okinawa Institute of Science and Technology have found one way around the problem: robots. OIST's Dr. Stefan Elfwing has been using small, rodent-like robots to study the long-term effects of disparate mating strategies, observing the evolution of the simulated species for over 1,000 generations. Two groups of robo-mice were programmed to forage for food (battery-powered recharge stations) and to find a mate (trade data through an embedded IR port), with each group following a different mating strategy. Robots dubbed "foragers" would focus on recharging, only mating if it didn't get in the way of feeding, while "trackers" would actively seek mates and go without charging if it increased their chances of linking up IR ports.

The experiment eventually yielded a population with both phenotypes, mirroring populations of real species with similarly distinct mating strategies -- which shows that robot simulations are a viable way to study long-term evolutionary concepts. Wondering what Elfwing's biological conclusions were? No worries, you can find the formal results of his research right here.

In this article: evolution, OIST, robotics, robots, science
All products recommended by Engadget are selected by our editorial team, independent of our parent company. Some of our stories include affiliate links. If you buy something through one of these links, we may earn an affiliate commission.