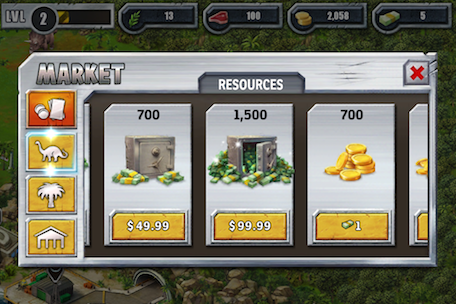 If current trends are any indication, freemium gaming isn't going anywhere, leaving players to make some personal choices in their gaming. Do you bite the bullet and pay premiums for in-game currency that's usually necessary to play the game properly? Do you grind for hours to scrape together the tiny bits of money you can earn through normal play? Or do you learn to build a Lego robot to do the grinding for you?

Yes, build a robot. That delightful science solution is exactly what one addicted player of Jurassic Park Builder did. Much like Family Guy: The Quest for Stuff and Simpsons Tapped Out, Jurassic Park Builder requires players to either buy in-game currency or check in randomly throughout the day to tap on dinosaurs to earn money without paying. Uli Kilian loved the game, but didn't want to deal with the freemium roadblocks of the iPad title. So he built a robot out of a Lego Technic kit to tap on the dinosaurs for him. You can see a video of the iPad-playing robot below.

The folks over at Wired have a gallery of photos of Kilian's robot which you can find right here. Perhaps we should be happy that Lego Technic kits aren't in every home. We can only imagine the sort of anti-robot DRM that would eventually pop up to stop players from using their Lego bot as a digital gold mining tool.

In this article: http:www.wired.co.uknewsarchive2014-0415lego-jurassic-park-robot, jurassic park, lego technic, robotics, simpsons
All products recommended by Engadget are selected by our editorial team, independent of our parent company. Some of our stories include affiliate links. If you buy something through one of these links, we may earn an affiliate commission.