Microsoft's new keyboard is meant to be used with Smart TVs 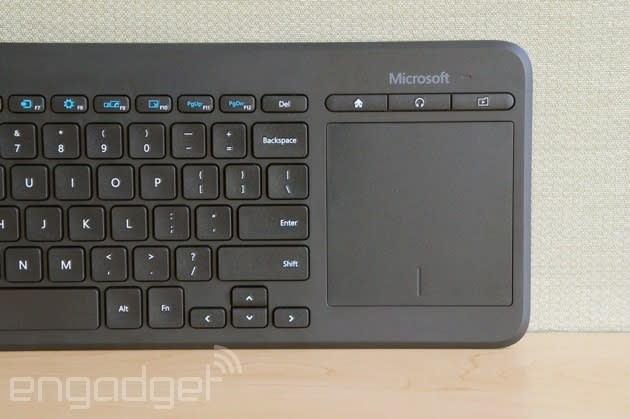 This fall marks 20 years that Microsoft has been making keyboards (make that "computer hardware," as it was quaintly called back in 1994). Ironically, though, as the company approaches this milestone, it's now making accessories not just for PCs, but... Smart TVs? Yes indeed. The company just announced the All-in-Media Keyboard, and while you could use it with a computer, it was designed to help you navigate your TV or media streamer from your couch. Chiefly, it features a built-in touchpad -- something we've seen on other devices -- meaning you won't need to balance a standalone mouse on your La-Z-Boy. In addition to the pad, there's a dedicated left-click button, along with volume and mute buttons, allowing you to hold the device almost as if it were a tablet, or a giant remote. Otherwise, the spill-resistant keyboard has all the features you'd expect (except, perhaps, a numpad), with three programmable keys and various Windows 8 shortcuts. As with some other Microsoft keyboards, it doesn't use Bluetooth but rather, a 2.4GHz wireless technology that requires you to plug in a USB transceiver. So long as your smart TV/media streamer is USB HID-compliant, though (and it probably is), you should be good to go. As a bonus, the battery door on the back has an extra cubby-hole for the transceiver, which should hopefully reduce the chances of you losing the thing. Intrigued? We've got hands-on photos above, and you'll be able to buy one tomorrow for around $40.

In this article: all-in-onemediakeyboard, allinonemediakeyboard, hdpostcross, keyboard, keyboards, mediakeyboard, microsoft
All products recommended by Engadget are selected by our editorial team, independent of our parent company. Some of our stories include affiliate links. If you buy something through one of these links, we may earn an affiliate commission.