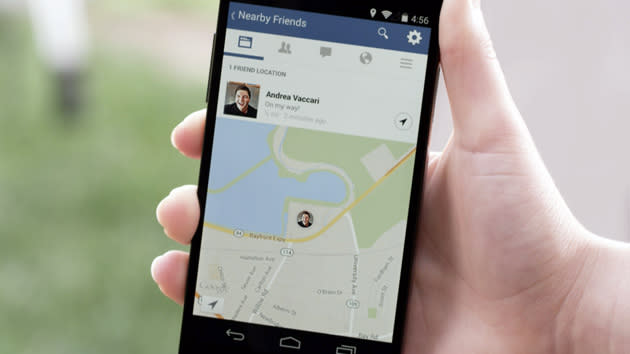 If you're of the sort that likes to plan those otherwise impromptu encounters, Facebook has just announced a optional new feature that will certainly help with that. Nearby Friends will show you if your friends are close by, so you can reach out about meeting up. This isn't automatically turn on inside Facebook's apps though, as you'll have to toggle it on and your friends will have to decide to share their location for it to work. However, there's the ability to broadcast coordinates for a certain amount of time -- the hour or two that you plan to be at your favorite bar, for example. You can also see when folks that have opted-in are traveling, giving you the opportunity to send any ramen or burrito recommendations their way. As you might expect, the feature will beam push notifications to your mobile device to alert you when your best mate is nearby. This news is certainly interesting in the context of the outfit's push for its own location services, along with recent news of Instagram testing the in-house Places for tagging photos. While there's no official arrival date, Nearby Friends is rolling out to both Android and iOS in the weeks to come.

In this article: facebook, mobilepostcross, nearbyfriends
All products recommended by Engadget are selected by our editorial team, independent of our parent company. Some of our stories include affiliate links. If you buy something through one of these links, we may earn an affiliate commission.