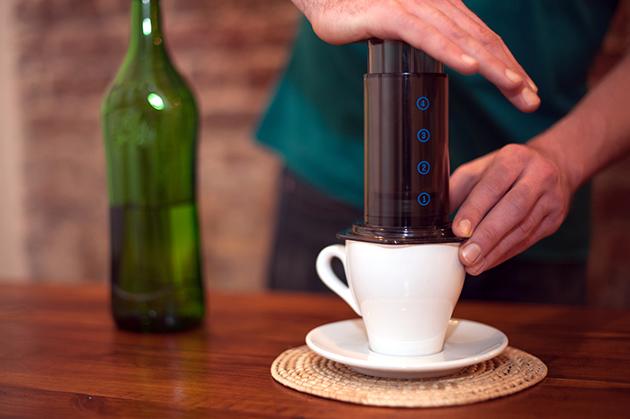 The AeroPress is a deceptively simple device -- it's basically a coffee syringe. The quick-brewing coffee maker sits somewhere between an espresso machine and a French press. You pour hot water over your grounds then force the water through them with a plunger. What makes the AeroPress unique is how quickly it can spit out a high-quality cup of Joe. The entire process takes roughly one to two minutes and at the end you've got a heavily concentrated, smooth mug of coffee. But unlike other modern methods for making a hot caffeinated beverage, the AeroPress was dreamed up by an engineer who spent a good chunk of his career making toys and electronics.

After designing flying discs for Parker Brothers, Alan Adler turned his attention to coffee following a conversation with a friend's wife. The two were discussing how hard it was to brew a single cup of decent coffee using a drip machine. That was in 2004. By the following year, Adler had his prototype -- a pair of plastic cylinders that fit together to create an air-tight seal. By forcing the hot water through the grounds at a high pressure, Adler was able to reduce the steep time to as little as 10 seconds (though many will wait up to 30 seconds before pressing the plunger).

The whole setup might seem overly simplistic, but it has inspired an entire subculture dedicated to devising the best ways to brew using an AeroPress. There's even a World Championship where competitors battle it out to see who can make the best mug of Joe using the device. Fast Company has an interview with the inventor and you can see Tested's method for brewing with the AeroPress below.

Image via the Department of Coffee and Social Affairs.

In this article: aeropress, Alan Adler, coffee, TL16COFF
All products recommended by Engadget are selected by our editorial team, independent of our parent company. Some of our stories include affiliate links. If you buy something through one of these links, we may earn an affiliate commission.