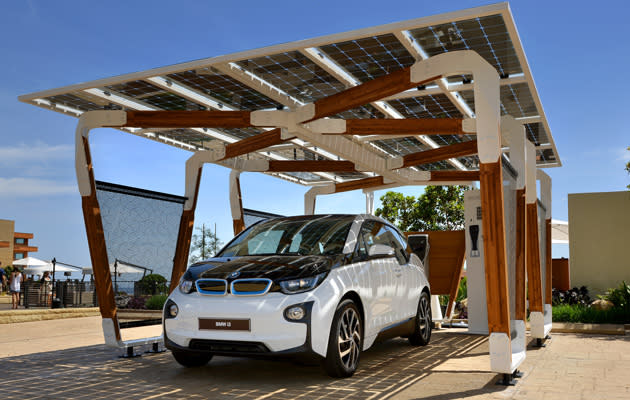 BMW's first electric vehicles are rolling out in the US, but do you really want to store your prized ride in a crusty old garage? The company's DesignWorks studio doesn't think so, which is why it's cooked-up this solar carport that could power your vehicle between trips around town. The concept structure itself boasts some serious eco-credentials, with struts made out of bamboo and transparent solar panels that promise to last up to 30 years. If you're in a sufficiently sunny area, you could also use any spare energy generated by the carport to reduce your domestic electricity bill. Given that this is just a concept project, we won't see BMW getting into the building trade any time soon -- but that won't stop us asking our contractor to cheekily produce something similar in the front yard.
In this article: BMW, BMW i3, Carport, DesignWorks, I3
All products recommended by Engadget are selected by our editorial team, independent of our parent company. Some of our stories include affiliate links. If you buy something through one of these links, we may earn an affiliate commission.