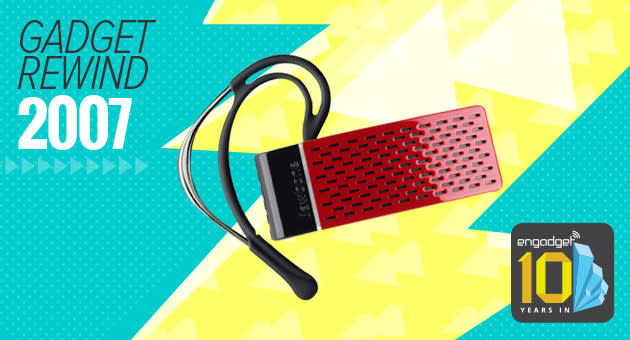 In the years before texting's domination of smartphones, the mobile-toting masses relied heavily on headsets and earpieces to stay connected. These people would often be seen shouting crazily into the air just so they'd be heard over environmental noise. That's about the time Aliph arrived with a solution with its first Jawbone earpiece. It sported military-tested noise cancellation and bone-conduction sound tech, as well as clean styling from designer Yves Béhar. The first wired iteration showed up in 2004, offering an alternative to the "business basics" style that was typical of mobile headsets at the time. It wouldn't be until 2007's Consumer Electronics Show, however, that Aliph would give consumers a redesigned and colorful wireless option with the release of the Bluetooth-enabled Jawbone.

The Jawbone's marquee feature was its ability to reduce ambient noise and transmit clear speech through its use of bone conduction. This nub rested against the wearer's cheek helping to detect speech and assist the device's noise-cancellation tech in deciding which other sounds to squash. While it reportedly worked like a charm, eliminating traffic, crowd and weed whacker-like machinery noise, some claimed it still fell victim to heavy winds. Many users were also annoyed that the volume buttons served to control other settings, thus complicating the interface. But, overall, it proved to be a comfortable fit and definitely served to enable those who would wear it all day long -- even at the dinner table.

Newer versions of the headset continued to be released over the years and in 2010, Aliph branched out from the Bluetooth-enabled earpiece market with the launch of a portable speaker called the Jambox. It was a move that then prompted the company to drop the "Aliph" name altogether and rebrand itself entirely as Jawbone. That shift toward a broader focus on audio was a curious turn of strategy for Jawbone. The company primarily known for its noise-cancellation technology was now in the business of making boomboxes -- devices specifically engineered to pump out the stuff its earpieces canceled out.

Did you own an Aliph Jawbone? Add it to your Engadget profile as a device you had (or still have) and join the discussion to reminisce or share photos of your device with other like-minded gadget fans.
In this article: 10yearsin, aliph, aliph jawbone, av, bluetooth headset, gadget rewind, gadgetrewind, gear, jambox, jambox by jawbone, mobile, mobilepostcross, wearables
All products recommended by Engadget are selected by our editorial team, independent of our parent company. Some of our stories include affiliate links. If you buy something through one of these links, we may earn an affiliate commission.