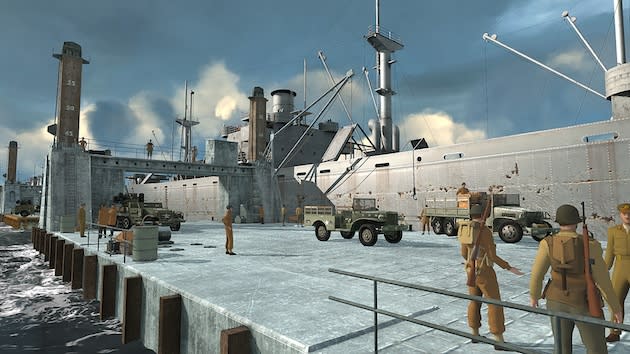 3D virtual reality headsets like the Oculus Rift are often lauded as the next big thing in entertainment, but they're also helping to change the way we learn. To mark the anniversary of the Allied invasion of Western Europe on June 6, 1944, French 3D specialists Dassault Systèmes have painstakingly rebuilt D-Day relics in high-definiton VR using the original blueprints of vehicles and devices used in the assault on Normandy 70 years ago. In contrast to million-dollar gaming franchises like Medal of Honor and Call of Duty, which give players a first-person perspective of the fighting, Dassault Systèmes wanted to recognize the engineering prowess and technological advancements that helped soldiers to liberate France. To do so, a team of 30 specialists recreated the Allied forces' Higgins' landing craft, Waco gliders and Mulberry Harbor, the first (floating) deepwater port of its kind. The resulting animations are perfect for viewing on virtual reality headsets like the Oculus, digitally preserving innovations that have since been lost to the sea.

In this article: 3d, d-day, hdpostcross, oculus, oculusrift, vr, WWII
All products recommended by Engadget are selected by our editorial team, independent of our parent company. Some of our stories include affiliate links. If you buy something through one of these links, we may earn an affiliate commission.