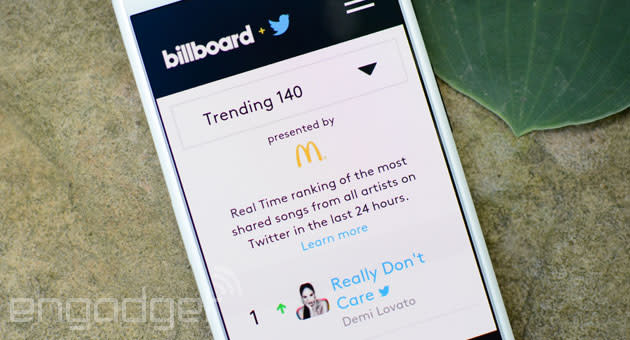 Back in March, Billboard and Twitter announced plans to bring real-time tune-tracking charts to the masses. Well, today a couple of those charts went live. The Trending 140 keeps tabs on shared songs in the US, calculated by increased action in the last 60 minutes. As you might expect, you can filter the results for the last 24 hours and stats will get posted weekly as the Billboard Twitter Top Tracks chart. There's an Emerging Artists ranking too, and it'll work and be published in the same way. In case you're wondering what lights up the ticker, tweets containing links to streaming services like Spotify or iTunes, music-specific hashtags (like #nowplaying or a song title) and words like "music," "song," or "listen" all weigh into the minute-by-minute tally. In the few minutes it took to write this post, John Mayer, Demi Lovato and Austin Mahone have all spent a moment in the number one spot.

In this article: billboard, billboardtwitterrealtimecharts, music, musiccharts, twitter
All products recommended by Engadget are selected by our editorial team, independent of our parent company. Some of our stories include affiliate links. If you buy something through one of these links, we may earn an affiliate commission.