Steve Ballmer is the owner of the LA Clippers 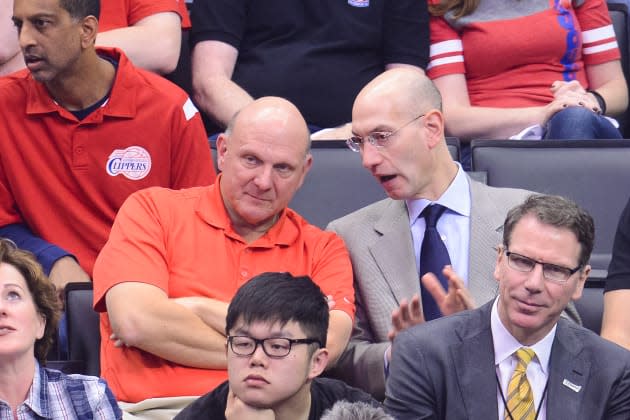 So what's Steve Ballmer up to now that Satya Nadella is running things at Microsoft? According to the LA Times, he's just made a tentative agreement to buy the Clippers for about $2 billion. After NBA commish Adam Silver (pictured above, with Ballmer at a Clippers game on May 11th) announced the league will force current owner Donald Sterling to sell the team after racist remarks he made leaked out, a number of potential bidders have appeared. According to the Times report, Ballmer bit out several other bids, including one from a group led by entertainment exec David Geffen for $1.6 billion. The ex-Microsoft CEO has a reported net worth of between $15 - $20 billion, so he can certainly afford it, with change left over to switch the mascot to something more familiar. There's no official announcement of the deal, and according to TMZ, negotiations are still under way with several bidders. Others like Grantland / ESPN's Bill Simmons are hearing the deal is just about done, with caveats that there are several hurdles before it's approved.

In this article: donald sterling, la clippers, microsoft, nba, steve ballmer
All products recommended by Engadget are selected by our editorial team, independent of our parent company. Some of our stories include affiliate links. If you buy something through one of these links, we may earn an affiliate commission.