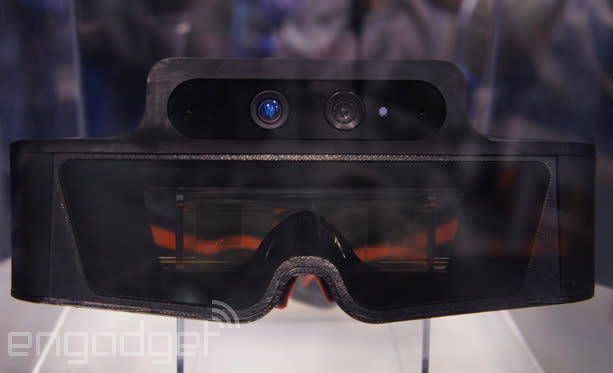 With all the attention Meta has been giving its $3,000 smart glasses prototype, you'd be forgiven if you thought the company and let its original Kickstarter design fall to the wayside. Forgiven, but wrong. Last May, the firm asked developers to help it build the world's most advanced augmented reality solution, promising developer kits for roughly half the price of Google's glass. Now that unit is almost ready to ship out -- we dropped by the company's booth at Augmented Reality Expo to see how it's shaped up.

The first thing we noticed is the name -- when we last saw the company's hardware prototype, it bore the awkward moniker of Meta.01. It's still pronounced the same, but in this revision reads better: Meta One. The device itself looks like a much more complete product too, trading 3D printed parts and exposed components for a molded visor design. It's not half as pretty as the Meta Pro's aviator styling, but it's a solid feeling device overall. Meta tells us that the design was tweaked to give the specs' a wider field of view, too.

It is, however, a developer device -- and it shows: the unit rested a little heavier on my nose than I would have liked. This, however, isn't a surprise. In addition to its own frame, the Meta One is front-loaded with a SoftKinetic motion sensor and Epson optics, and it carries the weight of both. Meta says its eventual consumer products will be a bit more refined, explaining that it's exploring other optical options for future models. Still, the AR goggles are worth their weight in hardware. The Meta One's motion sensor kept pace with my fingers as I thumbed my way through its demos: short experiences what saw me popping bubbles, moving objects suspended in my vision and exploring the intricate components of 3D-modeled machinery. It was a sparse selection of apps, but more are on the way -- Meta says the first round of Kickstarter developer kits will ship on July 1st.

In this article: ar, augmentedreality, awe2014, epson, hands-on, meta, meta1, metaone, smartglasses, softkinetic, stevemann, video
All products recommended by Engadget are selected by our editorial team, independent of our parent company. Some of our stories include affiliate links. If you buy something through one of these links, we may earn an affiliate commission.