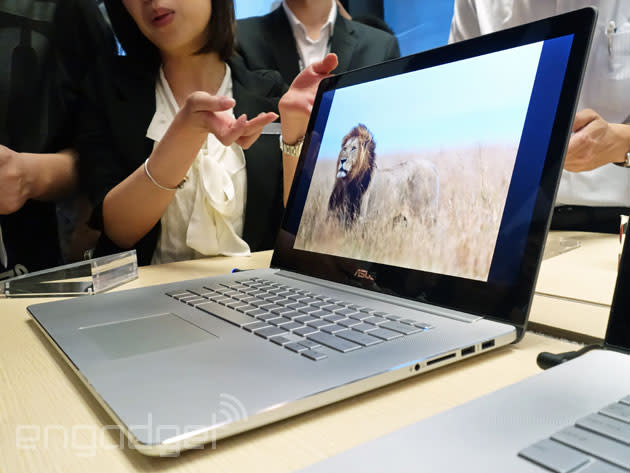 Before you yell at me for putting the word "MacBook" in the headline, hear me out: The new ASUS Zenbook NX500 really is one of the closest things I've seen yet to a Retina display MBP competitor. For all of you who ever wanted something as thin and powerful as the MacBook Pro, something just as high-res, the NX500 is it. Only, you know, it runs Windows! If you're just catching up (the news broke overnight, while our American readers were asleep), the NX500 is a 15.6-inch Ultrabook with a 3,840 x 2,160 IPS display, a Core i7 processor, 2GB NVIDIA GTX 850 GPU and up to 16GB of RAM under the hood. Wowza. Oh, and all of this fits inside a package that's just 19mm thick and weighs 4.85 pounds. That's technically thin and light enough to be considered an Ultrabook, though ASUS would prefer you not call it that -- whatever this is, "Ultrabook" is probably too wimpy a name.

It's not just specs that remind me of the MacBook Pro, though. This, too, is made of unibody aluminum, similar in color and texture to the ol' MBP. That said, you'd never, ever mistake the two: The NX500 has the Bang & Olufsen speakers built into the keyboard deck, with the fine grille flowing out from underneath the keys in an circular pattern. I think it's tasteful and quite lovely, personally, but to each his own; if you prefer more discreet speakers, I totally get that. Speaking of the keyboard, the 15.6-inch form factor allows for a spacious layout, though the buttons are on the shallow side, as is often the case with Ultrabooks (keep in mind that ASUS just barely got the machine down to the Ultrabook spec of 19mm, so I'm not sure it could have afforded to go with thicker keys).

As for the display -- the star of the show, really -- it covers 100 percent of the NTSC spectrum, along with 108 percent of Adobe RGB. Between the rich colors, sharp resolution and wide viewing angles, ASUS has cooked up one hell of a display. I'll reserve judgment for a full review, of course, but let's be real: It's pretty obviously a nice screen. I don't expect my opinion to change much, not even after more careful examination.

In this article: asus, asusnx500, asuszenbook, computex2014, hands-on, nx500, zenbook, ZenbookNX500
All products recommended by Engadget are selected by our editorial team, independent of our parent company. Some of our stories include affiliate links. If you buy something through one of these links, we may earn an affiliate commission.