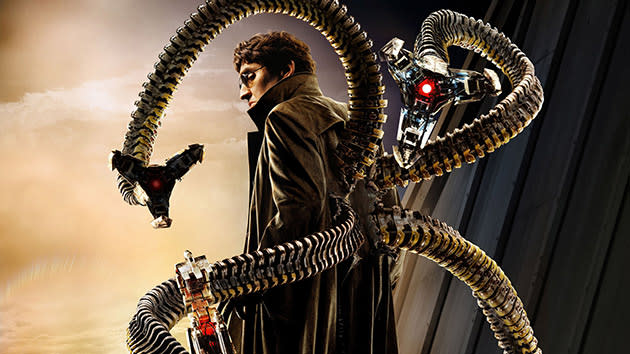 Two groups of MIT scientists are working on robotic limbs, which when worn together can make you look like one famous comic book villain: Doctor Octopus. Unlike prosthetic limbs developed to replace real ones, the teams' (from MIT's d'Arbeloff Laboratory) Supernumerary Robotic Limbs (SRLs) are designed to supplement your existing arms. One team showcased its latest shoulder-mounted SRL prototype at the IEEE International Conference on Robotics and Automation in Hong Kong, where members showed how it can take over tasks when your real arms are too busy. These particular SRLs take data collected by the accelerometer and gyro embedded in the base of the shoulder mount, as well as their accompanying wrist monitors. The limbs then move on their own based on your actions -- for instance, they move up when you raise your real arms, and in the future, they could open doors when you're carrying something.

The second team, on the other hand, is working on waist-mounted SRLs. Since the project was mostly sponsored by Boeing for its aging employees, the mechanical limbs are designed to be used either as arms or legs, in order to help with airplane construction by bracing or supporting workers' weights. Sadly, neither machine has mind-control capability, so you've got a lot of work to do to fulfill your Doc Ock dreams. In this article: dArbeloff Laboratory, ieee, mit, research, RoboticArm, roboticlimbs
All products recommended by Engadget are selected by our editorial team, independent of our parent company. Some of our stories include affiliate links. If you buy something through one of these links, we may earn an affiliate commission.