PreSonus' Atom SQ is a MIDI controller built for its DAW

Make your own kind of music in Guild Wars 2 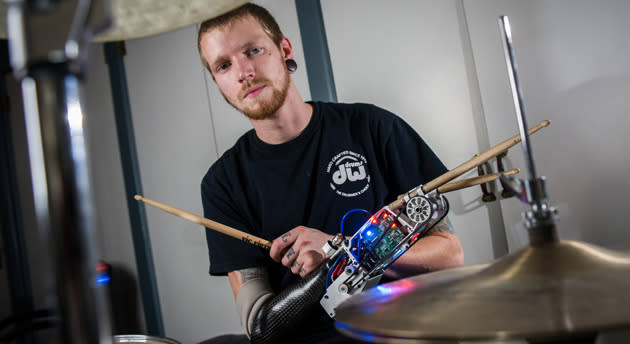 For many drummers, losing part of an arm could represent a career-ending tragedy. Not Jason Barnes, however. Georgia Tech professor Gil Weinberg has built a robotic prosthesis that not only restores much of Barnes' musical prowess, but effectively gives him a third arm. The wearable offers direct control of one drumstick using bicep muscles; a second, automated drumstick monitors Barnes' timing and plays in sync at a customizable pace, creating a sound that ordinary humans can't match.

As you might imagine, the robotic arm has advantages for metal and other musical styles where complex drumming is essential. However, Weinberg also sees uses for the technology in other fields -- astronauts and surgeons could perform complicated tasks in harmony with robots, for example. You can catch a brief demo of Barnes' augmented skills in the video below, and you can check it out in person at Kennesaw State University's Robotic Musicianship Demonstration on March 22nd.

In this article: drum, drummer, georgiatech, GilWeinberg, medicine, music, prosthesis, prosthetic, video, wearable
All products recommended by Engadget are selected by our editorial team, independent of our parent company. Some of our stories include affiliate links. If you buy something through one of these links, we may earn an affiliate commission.