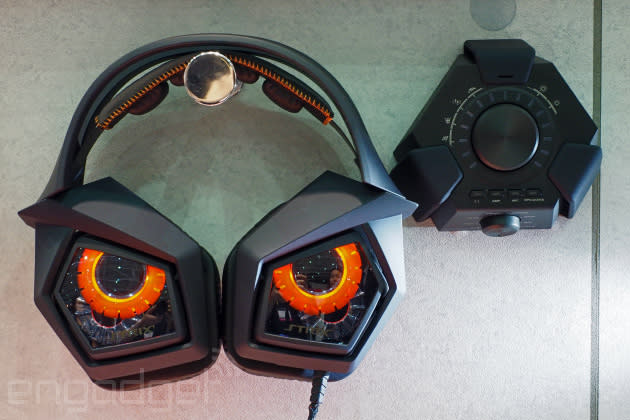 When ASUS announced its new mainstream gaming sub-brand Strix two weeks ago, it also unveiled the Strix Pro gaming headset which, to be frank, didn't look that good in the official renders. Luckily, we stumbled across the real deal at Computex, and its glowing orange owl eyes immediately got us fixated on them. These cans feature a "thunderous" 60mm neodymium-magnet driver in each side, and they're further enhanced by noise cancellation -- enabled by the USB control box -- that's apparently over 90 percent effective. Conveniently, the microphone boom is detachable, so that you can use the headset as a normal pair of headphones. Alas, we weren't able to test the headset properly at the booth, but it did feel comfortable thanks to the hexagonal ear cushions and the top cushioned elastic band. If you want one, we've been told that the Strix Pro will be priced around $100 when it gradually rolls out globally starting in July.

In this article: asus, computex2014, gaming, hands-on, headphones, headset, strix, strixpro
All products recommended by Engadget are selected by our editorial team, independent of our parent company. Some of our stories include affiliate links. If you buy something through one of these links, we may earn an affiliate commission.