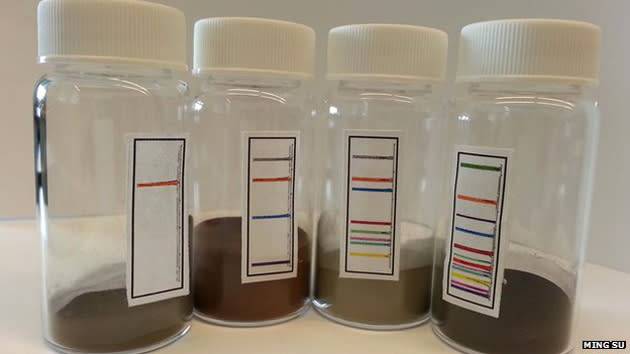 You may not pay much notice to product trackers like barcodes and RFID tags, but they're absolutely vital in some fields; they cut back on bootlegging and help police determine the origins of bombs. Worcester Polytechnic Institute may have just delivered a major breakthrough, then, by developing nanoparticle barcodes. The minuscule tracers identify an object by producing a unique thermal signature (those colored lines you see in the photo) when they reach their melting point. As they don't participate in any chemical reaction, you can integrate them into any item and get a positive ID whenever you like, even if you're dealing with exploded TNT.

The substance would most likely be used to stop counterfeiters, thieves and other shady dealers by making it impossible to erase evidence without destroying any ill-gotten goods. However, the technology might be particularly handy for fighting terrorism. Investigators could easily pinpoint the suppliers of not just explosives, but the chemicals used to make explosives -- they could identify the manufacturer (and even the individual store) for the fertilizer in a homemade bomb. The scientists' stealthy barcodes are a long way from reaching store shelves, if they do at all, but there could be a day when it's possible to trace virtually any high-value product.

In this article: barcode, chemistry, nanoparticles, science, theft, tracing, tracking, worcesterpolytechnicinstitute
All products recommended by Engadget are selected by our editorial team, independent of our parent company. Some of our stories include affiliate links. If you buy something through one of these links, we may earn an affiliate commission.