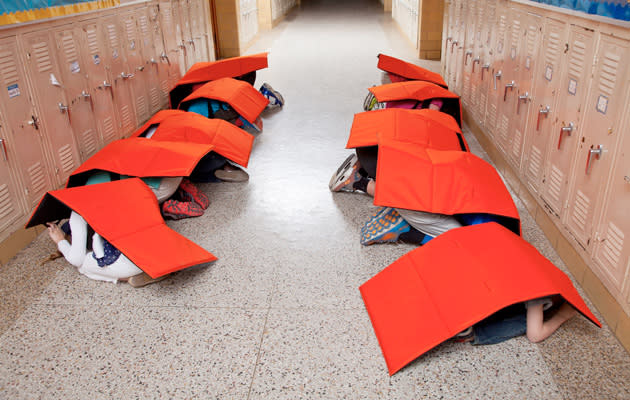 Throughout the history of blankets, hiding behind one to escape the boogeyman has been a largely pointless tactic. Now, however, an Oklahoma company has developed a blanket that'll protect you against fictional monsters as well as the very real dangers of tornado damage and 9mm bullets. Inspired by a tragedy where 24 people died at an elementary school that didn't have a tornado shelter, Steve Walker hassled other locals to come up with a solution. A materials scientist suggested making large pads out of Dyneema, a super-thick polyethylene that's meant to be tougher than Kevlar, that kids could hide under during tornados or incidents of gun violence. The company admits that the blankets don't come cheap, since they'll cost $1,000 per child, but it's still significantly cheaper than trying to find the cash to build a shelter for every school in the state.

In this article: BodyGuard Blanket, Children, Debris, Dyneema, Oklahoma, ProTecht, Safety, Steve Walker, Tornado
All products recommended by Engadget are selected by our editorial team, independent of our parent company. Some of our stories include affiliate links. If you buy something through one of these links, we may earn an affiliate commission.