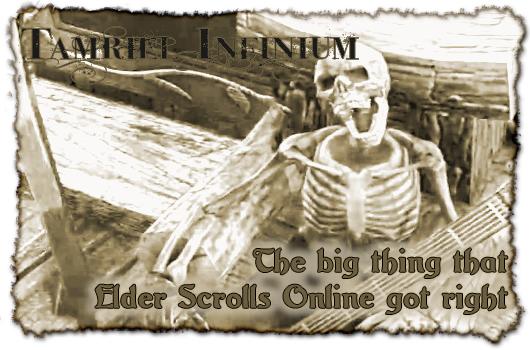 I've spent a lot of time over the last few weeks explaining and complaining about the issues I have with Elder Scrolls Online. Some of my readers got the impression that I neither like nor play the game. The reality is that I do like the game, but I'm horribly frustrated with it. Many of the ideas and promises that the developers set up for the game just aren't happening (or aren't happening fast enough). That's made me not want to log into the game. The fact that the game isn't roleplay-friendly hasn't helped, either.

Despite all my misgivings, ESO does compel me to log in for one main reason: the story. And not just the story but how well the characters are written and how the story is told. The subject matter isn't bland and cliche. The characters are taken seriously, even when the story is humorous, regardless of gender or race. Although I cannot give you every example here, I would like to touch on a couple of the stories that exemplify what I mean by great storytelling in an MMORPG.

Before I touch on those examples, I want to mention that a gamer friend, blogger, and streamer inspired me to write this article. You might know Jasmine Hruschak from some of the work she did here at Massively. On her Tumblr blog, she posted this, and I completely agree:

"ESO offers a level of equality in [its] writing and world that's unmatched by any current MMORPG. There are both heterosexual and homosexual relationships, men and women are put in positions of power in what feels like an equal number, there are more races than 'white' and 'off-white,' and the art direction and character designs follow the expected flow of an ES universe: my female character wears armor that will likely protect her in battle. [...] ESO tackles issues like racism and drug addiction, and even pregnancy and hard relationship choices. [The] writing team does this without falling back on tired tropes and a heaping pile of bigoted cliches."

The first story that caught my attention was the Wandering Minstrel. Forgive me for the spoilers, but I've tried to stick to stories that are fairly early in the level process. And I also stuck to the Aldmeri Dominion because that's where I leveled. This particular one hits about level 17 and starts outside Haven, the first city you run into in Grahtwood. I enjoyed this story because it was creepy and dealt with the very human issue of adultery.

An Altmer named Enda asks you if you've seen her husband. He is a minstrel who was touring the Dominion. She explains that he was famous in Auridon, and with the queen's unification of Altmer and Bosmer lands, Sorian felt he could make a name for himself in other places, too. After two months of his absence, Enda came to look for him. She said that he was last seen headed to Southpoint, but the soldiers would not let her in.

"No, this isn't the first time," she tells you about his wanderlust. "His songs, you see, they -- they make the heart soar." Then like a true victim of adultery, she excuses his actions and attempts to explain away his infidelity. "He has many ardent admirers," she says, "and he isn't... his will isn't so strong."

I love this bit of dialogue because of the way it's phrased, and I believe it's phrased this way intentionally. You might note that she never blames him, nor does she say that he did anything wrong directly. In fact, she can't even bring herself to say that he is unfaithful; she blames his weak will.

The pacing of this quest also made it interesting. As I mentioned, the quest starts outside Haven, on the southeast side of Grahtwood, then takes you to Southpoint, on the southwest side, then to a cottage in the south center of Grahtwood -- north of the other locations, but still south. In between those three areas are at least two full-story quest areas. Admist the dungeon to the south and the epic battle of Southpoint, this little side-quest gets forgotten -- or at least it was for me, initially.

I did find the note in Southpoint that tells the barkeep that Sorion was staying with a woman at the Sweetbreeze Cottage, but by the time I saw the quest there, I thought I was just dealing with a Bosmer who was breaking the Green Pact by eating pumpkins and carrots. I had assumed that I'd find a trove of stored food in the cellar hatch under her bed. Instead what I found was deeply disturbing.

In video games, especially in Elder Scrolls Online, I'm used to finding skeletons. There's a whole quest line called Keeper of Bones that has you carry a skull on your belt until you find the rest of his body in the form of other skeleton creatures. But you don't expect to find skeletons lined up in rows facing a stage as if watching a skeletal lute player. Then when the quest asks you to examine the lute, it says, "To Sorion -- Love, Lobel."

Of course, when you leave, the creepy woman, Lobelathel, attacks you and attempts to make you part of the audience. You are forced to kill her, but Enda's reaction when you tell her what happened said a lot to me.

"It was inevitable," she says. "The only person he really loved was himself. It was only a matter of time before one of his true loves objected. I will miss him dearly. I did love him in spite of everything... but I could not change him."

I'll just let that sink in as I tell you about the Phantom Guilt. On the side of the road you find a skeleton with a rope around its neck and a glowing amulet near it. You pick up the amulet -- like an idiot -- and wander to a journal near the body. It describes the journey of an ordinary man looking for adventure. The man had to defend himself from bandits and helped a family reclaim the body of a loved one. Although he was a decent person, the events haunted him, and voices spoke to him, just as a voice spoke to you after you put down the journal. It whispered, "Murderer."

Eventually, you find the maker of the amulet, and he destroys it. And you find out that he never intended for it cause so much pain. Although its original victim died, so did others along the way. I found the story interesting, but I also enjoy having the amulet, too, because it would talk to me, calling me a murderer or saying that I didn't deserve to live as I adventured across the countryside.

There are many more examples even in those early levels. I mentioned the Keeper of Bones quest that was well-made and funny. The Inn Keeper's Daughter and Eyes of Azura also surprised me and made me think in a way MMO quests rarely do. I do log in to experience moments like those, and I know many have had similar experiences. Which ones were your favorites, and are these stories interesting and exciting enough to keep you playing while you wait for promises to be fulfilled?

Traverse the treacherous terrain of Tamriel with Larry Everett as he records his journey through The Elder Scrolls Online, an MMORPG from ZeniMax. Comments are welcome below, or send a message to larry@massively.com. He promises to keep the arrow-to-the-knee jokes to a minimum.