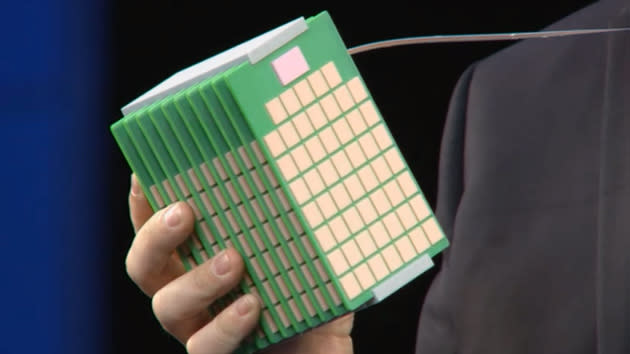 We've seen bits and pieces of technology that hint at the future of computing, but HP has just taken a big, big step toward bringing them all together. The company has unveiled The Machine (yes, that's the name), a processing architecture designed to cope with the flood of data from an internet of things. It uses clusters of special-purpose cores, rather than a few generalized cores; photonics link everything instead of slow, energy-hungry copper wires; memristors give it unified memory that's as fast as RAM yet stores data permanently, like a flash drive.

The result is a computer that can handle dramatically larger amounts of data, all the while using much less power. A Machine server could address 160 petabytes of data in 250 nanoseconds; HP says its hardware should be about six times more powerful than an existing server, even as it consumes 80 times less energy. Ditching older technology like copper also encourages non-traditional, three-dimensional computing shapes (you're looking at a concept here), since you're not bound by the usual distance limits. The Machine shouldn't just be for data centers and supercomputers, either -- it can shrink down to laptops and phones.

To HP, the platform opens the door to large-scale computing concepts that aren't even possible today, since devices can talk to entire networks to get things done. A doctor could compare your symptoms with that of every other patient on Earth, even while keeping everything private; smart cell towers would be aware of what's going on across other towers and react accordingly. The shift in thinking is significant enough that HP is writing its own operating system from scratch to handle what's possible with The Machine. It's also creating an optimized version of Android, so there is a chance you'll see Machine-based gadgets in your pocket.

The big obstacle at this point is simply timing. HP won't even have samples of the necessary memory until 2015, while the first devices using The Machine are expected to ship in 2018. However, the tech firm is also attempting the kind of fundamental shift that the industry hasn't seen in decades -- this is going to take a while as a matter of course.

In this article: android, hp, internetofthings, linux, machine, machineos, memristor, opensource, photonics, processor, themachine, video
All products recommended by Engadget are selected by our editorial team, independent of our parent company. Some of our stories include affiliate links. If you buy something through one of these links, we may earn an affiliate commission.