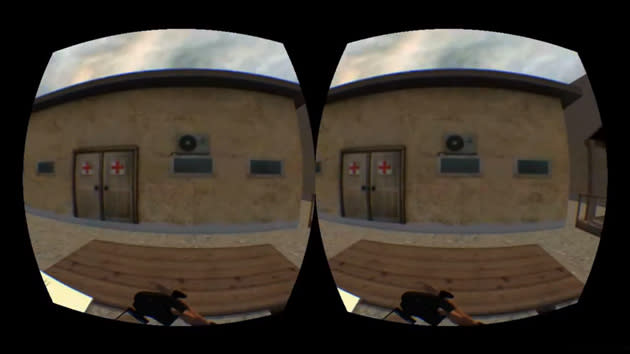 You're sat in the back of an armored personnel carrier when, suddenly, something hits you and the lights go out. Stumbling out of the darkness, you emerge onto the battlefield armed with just a video camera and a first-aid kit. Laying in front of you is a wounded soldier screaming for help, but would you know what to do? This is Stringer, an Oculus Rift title designed not as an alternative to Battlefield or Call of Duty, but to teach journalists sent into war zones how to survive.

The figure behind the project is former soldier turned journalist Ben Sainsbury, who was inspired by the story of a war correspondent who died because they lacked even basic first-aid training. Afterwards, he learned that writers that are sent into combat zones rarely receive any sort of survival awareness, let alone know how to properly tie a bandage. That's why, alongside Ali Kokulu, he began developing a game that would give civilians a safe taste of life on the front line, and hopefully teach them some very basic first aid. Unfortunately, work on the game has currently stopped, but we can imagine that plenty of people would fancy giving this a try -- after all, this is just the sort of immersive experience that VR was built for.

In this article: Ben Sainsbury, Combat, First Aid, Journalism, Oculus Rift, Stringer, video, War, Warzone
All products recommended by Engadget are selected by our editorial team, independent of our parent company. Some of our stories include affiliate links. If you buy something through one of these links, we may earn an affiliate commission.