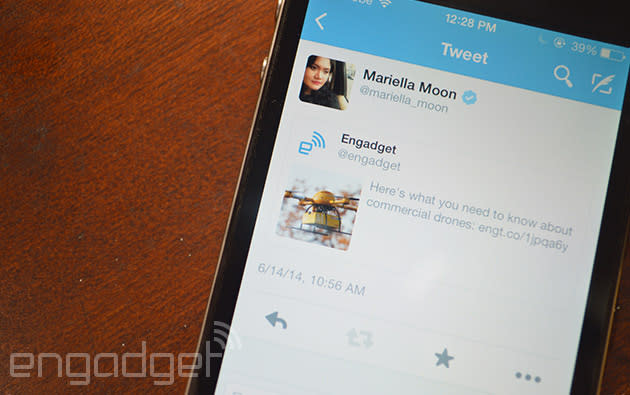 If you think retweeting's so 2013, then you may want to update your Twitter app now. As The Next Web notes, the latest version gives you the option to embed tweets in your tweets (credit Xzibit or Inception), so long as you're using either an iOS or an Android device. Take note, though, that embedding's a bit more troublesome than straight out retweeting. You'll have to copy the link to someone's tweet and then paste it into your Twitter app's text box (on a phone or a tablet, which means exerting double the effort). Also, you'll have to click and view each tweet individually to see the embedded boxes like in the image above -- they show up as ordinary links on the timeline, and your followers won't even see them as embeds on the web interface.

Still think it's worth the download? You can get the latest Twitter app from iTunes and Google Play now, and even if the feature isn't even listed in the What's New sections, it should be bundled with the most recent updates for both platforms. Since it hasn't been officially announced, though, this could just be an experimental rollout and not a permanent addition to the apps.

In this article: mobilepostcross, SocialMedia, SocialNetworking, tweet, twitter
All products recommended by Engadget are selected by our editorial team, independent of our parent company. Some of our stories include affiliate links. If you buy something through one of these links, we may earn an affiliate commission.