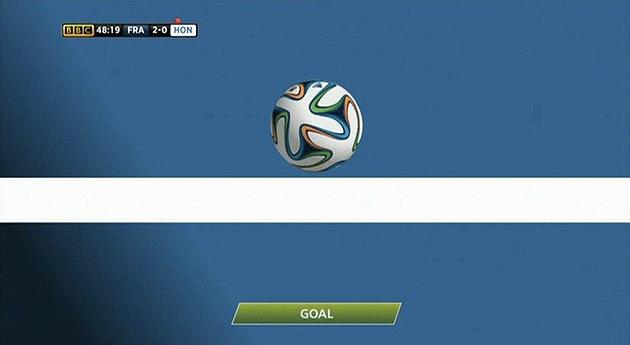 Well, the above image might look pretty straightforward, but when the shot from France's Karim Benzema bounced off the far post and deflected off the keeper into goal, in the midst of a World Cup match, there was more than a little confusion. The referee asked for clarification through the newly instituted goal-line technology, which initially (and confusingly) ruled 'No goal'. However, that was for the initial rebound, not when it bounced off the Honduras keeper and apparently crossed the line. For anyone that considers themselves a soccer fan, see if you would've called the goal yourself in the Vine clip after the break -- for as long as it remains up. (Even if FIFA isn't particularly technology friendly when it comes to the beautiful game itself, the association is surprisingly fast to act on copyrighted video uploads. Funny huh?)

In this article: football, france, goal, GoalLineTechnology, goooooaaal, soccer, video, worldcup, worldcup2014
All products recommended by Engadget are selected by our editorial team, independent of our parent company. Some of our stories include affiliate links. If you buy something through one of these links, we may earn an affiliate commission.