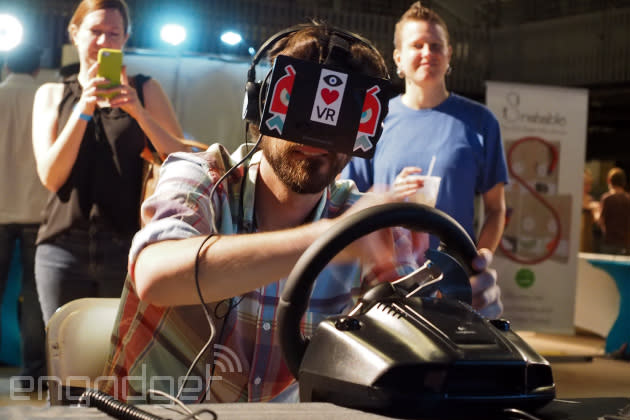 Last time we played a virtual reality game built by the folks from Chaotic Moon, we were giving a bunch of digital sharks the business with our Engadget fists of fury. Friday night at Engadget Live in Austin, we played a new game, called Death from Above, that pitted editor against editor. The game itself is fairly simple: drive a Jeep over hill and dale to the safety of a bunker while a second player attempts to bomb said Jeep into oblivion. The driver straps on an original Oculus Rift dev kit headset, some headphones and uses a Logitech racing wheel and pedal combo to pilot the Jeep, while player two rains death using an iPad and a companion app. It's a unique take on VR gameplay, and one that allows for a more social gaming experience. Also, it's a lot of fun.

Gallery: Death from Above with Oculus Rift demo | 6 Photos

Driving the Jeep was an intense experience once the bombs start falling. Graphics aren't up to par with say, next-gen consoles, simply because the resolution of the OG Rift headset can't display such fidelity. Still, Death from Above uses the Unity game engine, so it'll get there once Chaotic Moon gets the game running on a high definition DK2 headset. Regardless, it's a blast to play. I found my pulse quickening and I started white knuckling the steering wheel once i was enveloped in digital smoke and flame from falling bombs. Every other time I've played a VR game with the Oculus Rift, it's been a visceral, engaging experience, and Death from Above is no different.

The game is highly entertaining for the player dropping bombs, too. iPad in hand, you get an overhead view of the area the driver's traversing and a targeting reticle that follows where you tap your finger on screen. There's a delay between when you tap and when the bombs actually land, so leading the jeep is key to success. In short order, bloodlust set in, with folks cheering the bomb dropper as the driver swerves all over the map in an effort to survive. In my experience, the bomber has the advantage over the bombee -- I played as a driver six times, and was only able to make it to the safety of the bunker twice.

I highly recommend you check out the game if you get the chance... and if you weren't among the attendees in Austin who played, fear not. Chaotic Moon will be bringing Death from Above to Engadget Expand in NYC this November.

Edgar Alvarez and Zach Honig contributed to this report.

In this article: chaoticmoon, ChaoticMoonStudios, engadgetlive, game, games, gaming, hands-on, hud, oculus, oculusrift, oculusvr, video
All products recommended by Engadget are selected by our editorial team, independent of our parent company. Some of our stories include affiliate links. If you buy something through one of these links, we may earn an affiliate commission.