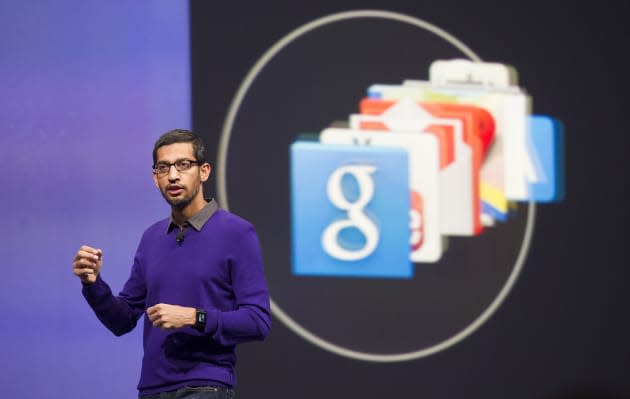 You can move one more item into the confirmed list for tomorrow's Google I/O keynote: a new version of Android. Your guess is as good as ours as to which L-word treat (we assume, following KitKat and Jelly Bean) Google plans to name its next iteration of the mobile OS, but as part of a lengthy profile for Bloomberg, senior VP Sundar Pichai reveals he will offer a "preview" at the developer event. It's a new approach for Google, in publicly revealing the new version (which may have momentarily surfaced on its issue tracker yesterday) well ahead of its planned release later this year, but similar to the way Apple, for example, is rolling out iOS 8. Also confirmed is Android Wear, complete with manufacturing partners and new devices, while the plans for Android TV are still shrouded in rumor.

In this article: android, androidtv, google, googleio, googleio2014, hdpostcross, l, mobilepostcross, sundarpichai
All products recommended by Engadget are selected by our editorial team, independent of our parent company. Some of our stories include affiliate links. If you buy something through one of these links, we may earn an affiliate commission.