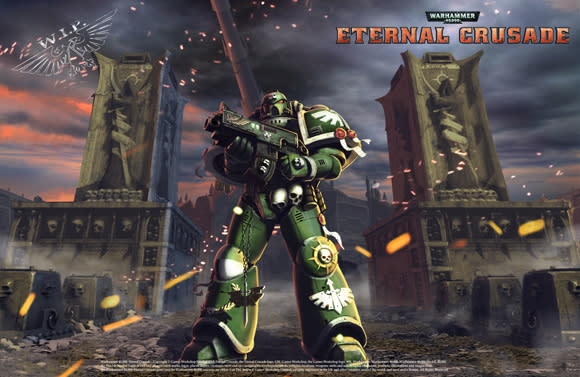 The founder and pre-order program for the upcoming Warhammer 40,000: Eternal Crusade MMO is now officially live. Founder tiers available start with the $40 Warrior Pack (which includes the game, early module access, 40,000 game points, and special perks) and run the price scale up to the $450 (and currently on sale) Xenos pack, which includes the game and early access along with 610,000 game points and even more special perks.

Not into forking over your cash just yet? At E3 a few weeks ago, Behavior Online told Massively that at launch (expected in 2016), Eternal Crusade will boast a hybrid model, with a $40 buy-to-play option and a free-to-play option that restricts players to the Ork Boyz faction. The cash shop will sell "pay-to-be-cool" cosmetics and skins, the devs said.

The studio also issued a new teaser trailer to coincide with the program launch. We've included it below.

In this article: action-mmorpg, behaviour, behaviour-interactive, eternal-crusade, founders-program, trailer, trailers, video, videos, warhamer-40k, warhammer, warhammer-40k-eternal-crusade, warhammer-eternal-crusade
All products recommended by Engadget are selected by our editorial team, independent of our parent company. Some of our stories include affiliate links. If you buy something through one of these links, we may earn an affiliate commission.