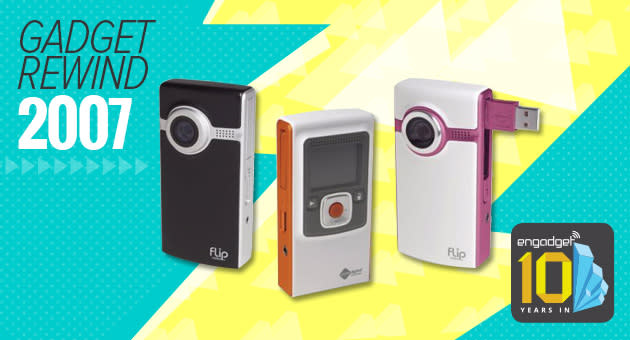 It was the mid-aughts and user-generated video was on the rise: Google had just purchased YouTube and consumers were starting to get their first camera-equipped cellphones. Despite all that, the quality of video captured by phones at the time was poor, and full-fledged camcorders were still too costly for most consumers to consider. Those factors made for a perfect storm and left the market wide open for Pure Digital. In 2007, the company introduced its Flip Video Ultra, a portable device that offered a solution to all that subpar video. The Flip Video Ultra featured a simple camera that captured quality video at an affordable price. And when it was let loose on the market in late 2007, it was unstoppable -- at least for a time.

The Flip Video Ultra had humble beginnings. Back in 2005, Pure Digital teamed up with CVS to release its One-Time-Use Camcorder, which cost $30 and could capture 20 minutes of video. Transferring those precious moments to DVD would run you another $13. After a bit of success, the company moved on to more eco-friendly, non-disposable units. And then, in 2007, it rebranded the line as Flip Video. Like its predecessors, it was meant to be held upright when shooting video and incorporated intuitive controls. The design was a bit blocky, but it was the first to include a flip-out USB connector, making it easy to connect to computers without any cables. The Flip Video also came preloaded with FlipShare software, letting users plug, play, edit and share to sites like YouTube from any PC with a USB port.

The first Flip Video had only been on the market for a few months when Pure Digital replaced it with the next-gen Flip Video Ultra. The revision specifically addressed many of the original's design issues. Pure Digital shaved some weight off the device and released it in an array of colors including black, pink and orange. With this new Flip, users could capture and save up to 60 minutes of VGA-quality (640 x 480) video on the 2GB model -- it even boasted better low-light performance. Interacting with the device was a piece of cake using its 1.5-inch color display and buttons for play, record, delete, zoom and screen navigation. It also ran on two AA batteries, making it easy to re-up, rather than wait hours for batteries to recharge.

Because sales of the device were going so well in 2008, analysts at NPD listed the Flip Video Ultra as the top-selling camcorder in June of that year. It even managed to beat out devices from well-known brands like Sony, JVC and Panasonic. Soon, though, those same heavyweights were copying the Flip's success with budget-priced camcorders of their own. Cisco, the well-known enterprise hardware outfit, seized on Pure Digital's rise in the market and acquired the company in 2009. Unfortunately, the lifespan of the Flip Video line would prove to be short-lived and smartphones, with their ever-improving video capabilities, quickly replaced the single-use tech. By 2011, the market for these niche video devices began to completely dry up leading Cisco to altogether shutter the Flip camera division.

Did you own a Flip Video Ultra? Add it to your Engadget profile as a device you had (or still have) and join the discussion to reminisce or share photos of your device with other like-minded gadget fans.
In this article: 10yearsin, camcorder, cameras, flip video, flip video mino, flip video ultra, gadget rewind, gadget rewind 2007, gadgetrewind, gear, pure digital
All products recommended by Engadget are selected by our editorial team, independent of our parent company. Some of our stories include affiliate links. If you buy something through one of these links, we may earn an affiliate commission.