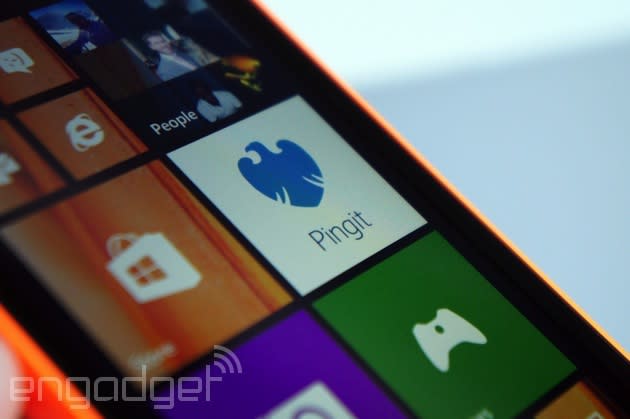 Windows Phone users often have to resign themselves to getting apps months, if not years after their iOS- and Android-toting counterparts. That's especially the case for Barclays' Pingit app, which after more than two years has finally made its way to Microsoft's mobile platform. If you're not familiar, Pingit allows users to send money using only a recipient's phone number regardless of who either bank with. Banking customers have been able to check their balance and pay bills using Barclays' mobile banking app, but with new initiatives like Paym aiming to streamline mobile payments, Pingit could enjoy great momentum as a result. Despite being late to the party, Barclays' new app is still likely to enjoy some early-mover advantage, as only a handful of other banks have dedicated Windows Phone apps.

In this article: bank, banking, barclays, microsoft, mobile payment, mobilepostcross, pingit
All products recommended by Engadget are selected by our editorial team, independent of our parent company. Some of our stories include affiliate links. If you buy something through one of these links, we may earn an affiliate commission.