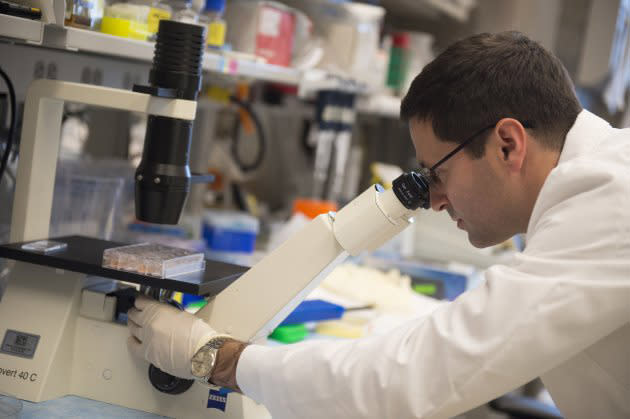 Of all the tragic things that come with Alzheimer's disease, its tendency to sneak up on people is one of the toughest to deal with. That's because by the time the condition is even detectable, there's a good chance it's already too late to turn back the tide. Earlier diagnoses could mean the difference between years of mental decline and a life of relative normalcy -- that's why a test developed by researchers at King's College London and Oxford University could be such a game changer. According to The Telegraph, the scientists can predict whether or not Alzheimer's will strike someone with existing memory loss problems by looking for 10 telltale proteins in their blood.

Their success rate is nothing to scoff at either: They're right about 87 percent of the time. That's right, a blood test may be able to unlock the (possibly disconcerting) secrets of your cognitive future. Here's the rub, though: You won't see this in your local GP's office very soon. The first tests -- which are expected to become available within about five years -- will be used to ferret out those who are likely to be stricken with Alzheimer's for inclusion in clinical trials. With any luck, some of the drugs that haven't helped people in later stages of the disease will be able to do some real good when it's caught early enough. Researchers hope that the right combination of testing and treatment could turn the degenerative disease into something that can be ultimately fended off. That's not much consolation for the roughly 35 million people who already suffer from it, but for the rest of us? That's hope where there was none before.

In this article: alzheimers, bloodtest, KingsCollegeLondon, OxfordUniversity, science
All products recommended by Engadget are selected by our editorial team, independent of our parent company. Some of our stories include affiliate links. If you buy something through one of these links, we may earn an affiliate commission.