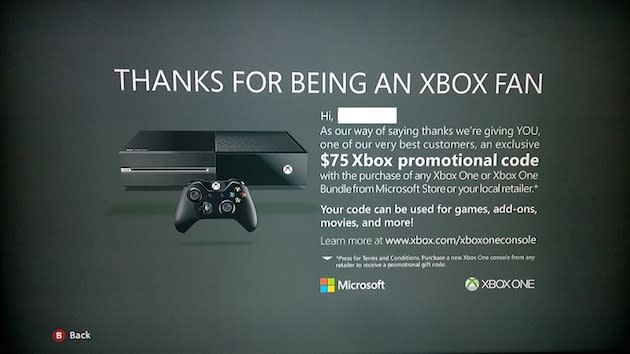 If you've pondered buying an Xbox One, but have felt a sense of loyalty to your Xbox 360, Microsoft is very keen to help you make the switch. As spotted by user BeforeU on NeoGAF, the company is running a new promotion that gifts its "very best customers" with a $75 promotional code if they buy an Xbox One or any Xbox One bundle. It appears that not everyone is eligible for the offer, with Microsoft only targeting a subset of Xbox 360 owners across the US ahead of its July 31st deadline. However, there's no word on whether the promotion will come to other countries. To find out if you qualify, turn on your Xbox 360 and make sure it's connected to Xbox Live. If you've been selected, you can order a (full-priced) console from any retailer and Microsoft will credit your Xbox account with $75, as long as you redeem your voucher code by October 15th. That'll cover you for at least one Xbox One game like Destiny, ensuring your game collection gets off to a good start.

Update: Microsoft has confirmed that the deal is also running in the UK and Canada:

"This short-term promotion is offered to select Xbox fans in the US, Canada and the UK. We are always looking for opportunities to bring promotions like this to our customers, but we have nothing further to share at this time." In this article: credit, games, gift, hdpostcross, microsoft, promotional code, store, xbox, xbox 360, xbox one
All products recommended by Engadget are selected by our editorial team, independent of our parent company. Some of our stories include affiliate links. If you buy something through one of these links, we may earn an affiliate commission.