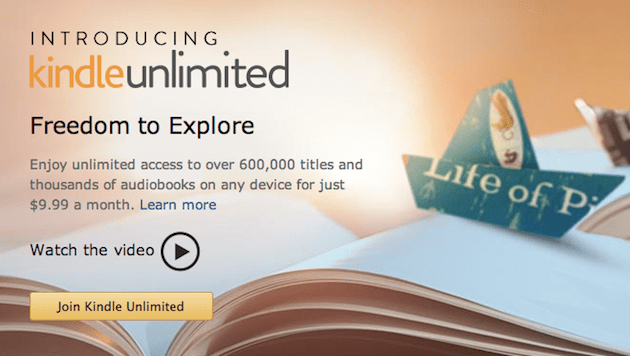 Ever heard of Kindle Unlimited? Us either, at least not until now. Originally spotted by kboards, a forum site that welcomes Kindle chatter, this previously unknown service appears to be an upcoming all-you-can-read subscription service from Amazon. For $9.99 monthly, as described by the image above, Kindle Unlimited is said to offer access to more than 600,000 books and "thousands" of audiobooks. Not surprisingly, that healthy digital library doesn't appear to include any of the major US publishers (Hachette, HarperCollins, Macmillan, Penguin Random House and Simon & Shuster) -- something e-book subscription service Scribd is very familiar with, since it only carries titles from two of the "Big 5." Amazon has yet to announce Kindle Unlimited, but after seeing these ads slip through the cracks, we can safely say it's only a matter of time before it becomes official.

Update: To add more to fuel to the fire, Gigaom has posted a promotional video of the service, which just about confirms that Kindle Unlimited is the real deal.
In this article: Amazon, Amazon Unlimited, AmazonUnlimited, e book, e books, e reader, e readers, e-book, e-books, e-reader, e-readers, ebook, ebooks, Unlimited
All products recommended by Engadget are selected by our editorial team, independent of our parent company. Some of our stories include affiliate links. If you buy something through one of these links, we may earn an affiliate commission.