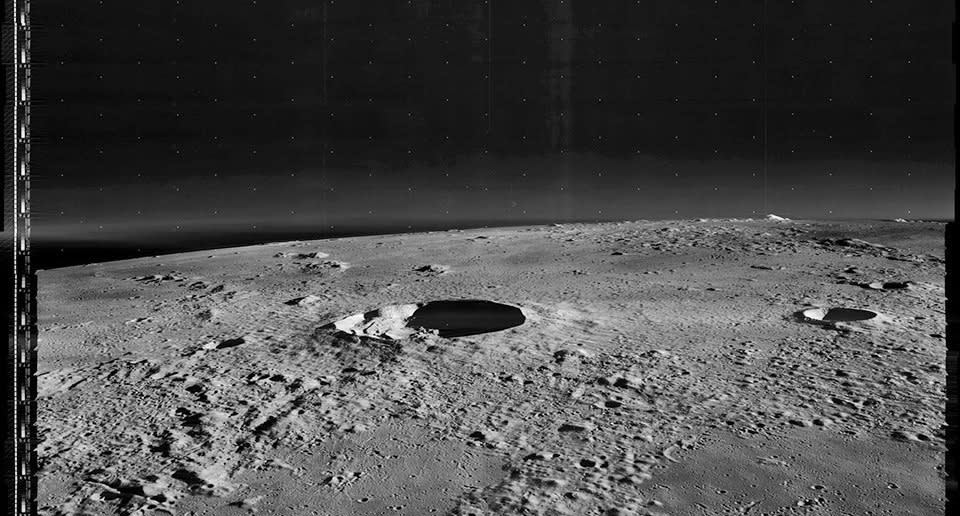 If you've ever used Street View on Google Maps to preview an unfamiliar travel destination, then you'll understand the reasoning behind NASA's Lunar Orbiter missions during the late '60s. The space probes were doing reconnaissance and beamed back 160 pairs of images covering a total of 12,000 square miles of lunar landscape. Unfortunately, the technology at the time resulted in less-than-ideal photographic quality. In 2008, however, a group called the Lunar Orbiter Image Recovery Project (LOIRP) was able to track down the original tapes and restore them to their full resolution. The LOIRP set up shop in an abandoned McDonald's -- which they dubbed McMoon's -- near the NASA Ames Research Park in California and began wrangling archived tape reels and defunct machinery to help them achieve their goal. The story was documented for the Carnegie Museum of Art (CMOA) and released this week as Extraterrestrial: The Lunar Orbiter Image Recovery Project. It's the third installment of CMOA's The Invisible Photograph series, which deals with imagery that's been lost, degraded or almost destroyed. In preparation for the Apollo 11 moon landing, NASA launched five successive probes between 1966 and 1967 to explore the Moon's surface scouting for viable landing sites and scientific research locations. The probes were able to snap photographs of the moon's surface using traditional film cameras from an orbit as low as 28 miles. The film was developed on board the craft, scanned and then beamed to Earth where the data was recorded onto 70mm magnetic tapes. NASA converted that information to photographs using 35mm film at a 250:1 dynamic range (essentially 8-bit quality). Data on the original tapes, however, had been captured at 1000:1, four times the resolution of what NASA had been able to output at the time. The Lunar Orbiter Image Recovery Project tracked down the originals and managed to acquire vintage machines like Ampex FR-900 tape drives to reclaim the images at their full resolution. The project was a success, and this is their story:

In this article: apollo, apollo moon landing, carnegie museum, carnegie museum of art, cmoa, loirp, lunar orbiter, lunar orbiter image recovery project, lunar topography, mcmoons, moon, nasa, nasa aames, space, space photography, space probes
All products recommended by Engadget are selected by our editorial team, independent of our parent company. Some of our stories include affiliate links. If you buy something through one of these links, we may earn an affiliate commission.