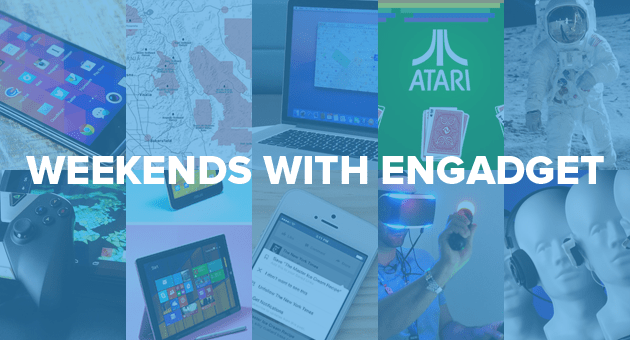 This week, we looked at the top 12 tablets available, watched Bose sue Beats, took the OS X Yosemite public beta for a test drive and reviewed the Oppo Find 7. Read on for Engadget's news highlights from the last seven days. Oh, and be sure to subscribe to our Flipboard magazine! Just inches away from officially being part of Apple, Beats is now being sued by Bose. According to the latter, Dr. Dre's Studio line of wireless headphones infringe on one of plaintiff's noise-cancelling patents. What a bummer. The history of VR is riddled with missteps like the Nintendo Virtual Boy, but that hasn't stopped today's major players from investing in the medium. Even despite the limits of current tech, Google says the best time for VR is right now. What you're looking at is the Oppo Find 7. This Android-powered handset has a gorgeous Quad HD display and plenty of horsepower under the hood, but can it compete with the Galaxy S5 or LG G3? Read our review and find out. Don't have the time to catch up on every baby picture and Buzzfeed 'quiz' in your Facebook feed? Of course you don't. But thanks to a new feature called Save, users can now archive music, links and more for later viewing. Yesterday marked the 45th anniversary of humankind's first steps on the lunar surface. Read on for everything you need to know about Apollo 11's historic voyage to our planet's moon. Want to fly a drone? Don't do it here

You've probably never tried to pilot your drone through a nuclear power plant, but that's not the only sort of no-fly zone that should be avoided. Check out this map of locations where you should never fly your UAV. Atari's betting its future on gays and gamblers

Atari, once a giant of the gaming industry, stands on the precipice of irrelevance. But now, the company's betting its future on on the LGBT community with its upcoming game called Pridefest. NIVIDIA's second generation Shield claims to be the "ultimate tablet for gamers." But is this 8-inch, Android-powered slate all it's cracked up to be? OS X Yosemite preview: the Mac gets a major makeover

The public beta of Apple's next desktop OS goes live tomorrow, but before you dive in head first, check out our preview. Click through for Dana Wollman's take on OS X Yosemite. The top 12 tablets you can buy right now

Deciding to buy a slate is easy. But choosing which one, that's a different story. Check out the Engadget Buyer's Guide for our top 12 favorite tablets that you can buy right now.

In this article: apollo11, atari, beats, bose, drone, find7, oppofind7, shield, twr, VR, weekendswithengadget, yosemite
All products recommended by Engadget are selected by our editorial team, independent of our parent company. Some of our stories include affiliate links. If you buy something through one of these links, we may earn an affiliate commission.