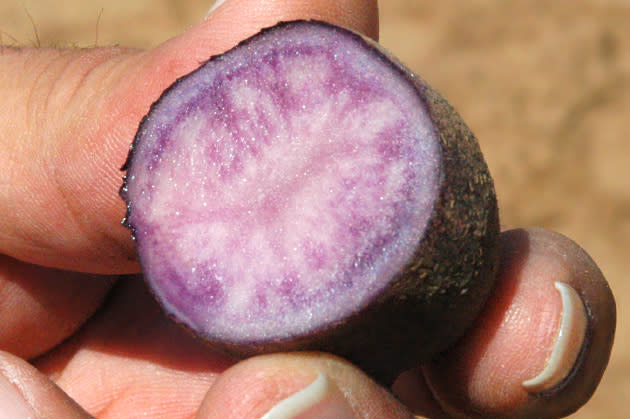 Potato breeding programs at Michigan State University and Texas A&M have been churning out modified spuds for the better part of a decade, if not longer, but thanks to A&M's Creighton Miller, we now have a better idea of the 'designer' potato's target market. "What we're doing now is developing unique varieties that appeal to the younger set that is high-income that are willing to try something different," he explained in an interview with AgriLife Today, holding a variety of product, including a "gourmet" potato sporting "red flesh with splashes of yellow." Michigan State's program, meanwhile, has developed a variety called "Raspberry." According to a report in Txchnologist, that potato has vibrant red flesh and a skin that's flavored like the fruit. You might get a good feel for how it tastes by taking a bite while it's still garden-fresh, but that particular potato, along with another simply referred to as "MSQ558-2RR," are likely destined to end their lives as thin-cut chips. De-licious.

In this article: genetic, genetics, michiganstate, modification, potato, potatoes, texasam, video
All products recommended by Engadget are selected by our editorial team, independent of our parent company. Some of our stories include affiliate links. If you buy something through one of these links, we may earn an affiliate commission.