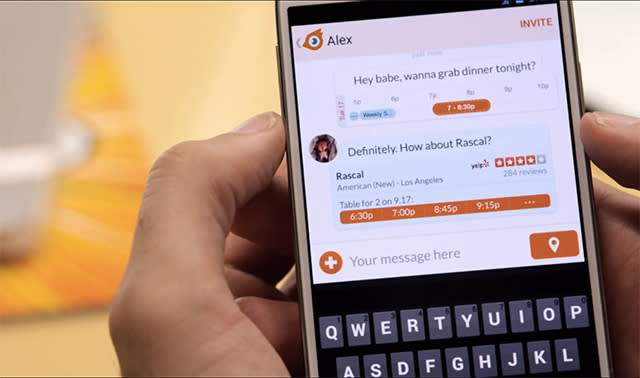 Oh, you thought Google might take a break from snapping up startups this summer? Guess again. The search giant just acquired an awfully neat messaging app called Emu, which worked by injecting a little contextual intelligence into your conversations. Agonizing over tonight's dinner plans? Emu would surface its Yelp rating right within the stream of messages. Asking a friend if they wanted to see a movie on Friday? You'd be treated to a list of movies playing around you, and you could order tickets from there. Mentioning a day or date would also yield a tiny glimpse at your calendar so you could make sure you were actually free.

The beauty of Emu's formula was that those additional bits were totally unobtrusive: They were tiny, but valuable bits of info that hovered under each message. It's not hard to imagine Google eventually baking some of those contextual smarts into something like Hangouts, either. After all, it's already sitting on a ton of data -- from Zagat reviews to Maps information to your calendar -- that it could helpfully surface in the middle of your conversations. Thankfully for the Emu team, Google doesn't seem to be the type to hold grudges: The app began life as an Android exclusive before the founding team made the call to jump ship to iOS exclusively last year. Bad news for current users, though: The Emu app will officially go dark on August 25, so wrap up those convos while you still can.

In this article: acquisition, apps, emu, google, messaging
All products recommended by Engadget are selected by our editorial team, independent of our parent company. Some of our stories include affiliate links. If you buy something through one of these links, we may earn an affiliate commission.