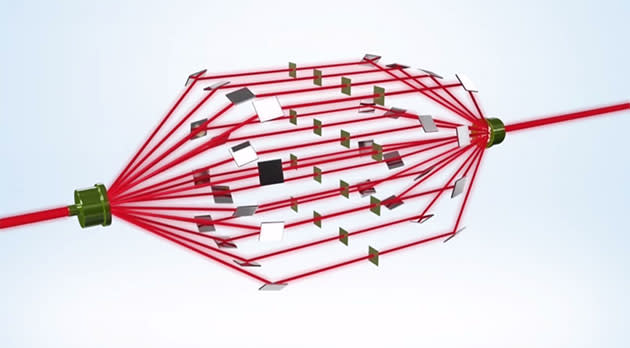 Small, eco-friendly optical supercomputers may soon be crunching quadrillions of calculations per second (exaflops) if a company called Optalysys has its way. It claims to be months away from demonstrating a prototype optical computer that will run at 346 gigaflops to start with -- not as fast as the best supercomputers, but pretty good for a proof-of-concept. Here's how it works: low-intensity lasers are beamed through layers of liquid crystal grids, which change the light intensity based on user inputted data. The resulting interference patterns can be used to solve mathematical equations and perform other tasks. By splitting the beam through multiple grids, the system can compute in parallel much more efficiently than standard multi-processing supercomputers (as shown in the charming Heinz Wolff-hosted video below).

It also uses very low amounts of power, with exascale-level systems capable of running for mere thousands of dollars a year, compared to millions a year for the Tinanhe-2, the current supercomputer champ. After launching the prototype system, the company plans to build two products: a "big data" optical co-processor that can work with existing supercomputers, and a standalone optical solver supercomputer. It expects the latter to launch as a product in 2017 at 9 petflops, with up to 17.1 exaflops (17,100 petaflops) by 2020. By way of contrast, the Tianhe-2 does about 34 petaflops. It all sounds pretty pie-in-the-sky at this point, but we should have a better idea of the feasibility when the prototype arrives in January.

In this article: computing, exaflop, exascale, optical, petaflop, supercomputer
All products recommended by Engadget are selected by our editorial team, independent of our parent company. Some of our stories include affiliate links. If you buy something through one of these links, we may earn an affiliate commission.