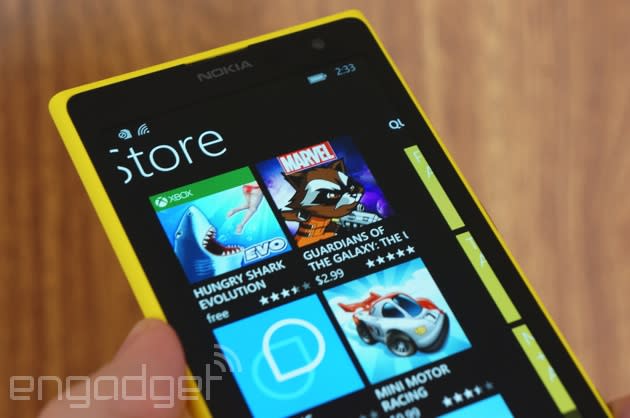 Windows Phone's app catalog may not be as extensive as what you'll find on Android or iOS, but you won't be hurting for choices any time soon. Microsoft has quietly revealed that the Windows Phone Store racked up over 300,000 apps as of this past June, or nearly twice what it had a year earlier. It had 200,000 apps as of December, so the rate is clearly accelerating -- half of its library appeared in the past several months. There are also 50 percent more developers, Microsoft adds, which means that many of the new titles are from first-timers.

The expansion will definitely help if you're considering a Windows Phone, especially since it includes big-name titles like Instagram and Vine. With that said, there's still a long way to go before Microsoft fills in all the gaps. A quick look at the store shows that many top apps either come from Microsoft or are unofficial replacements for missing software, like Snapchat and YouTube. The quantity helps, but quality is still an issue -- it's hard to switch from rival platforms when you may have to give up a favorite service or utility.

In this article: apps, microsoft, mobilepostcross, smartphone, windowsphone, windowsphonestore
All products recommended by Engadget are selected by our editorial team, independent of our parent company. Some of our stories include affiliate links. If you buy something through one of these links, we may earn an affiliate commission.