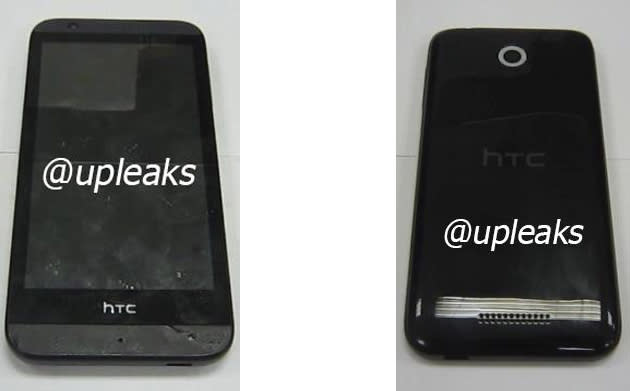 Qualcomm teased us with the prospect of powerful 64-bit smartphones arriving in late 2014 and early 2015, but it looks like you'll have to dial back your expectations for the first wave of devices. New tipster @upleaks has posted details and photos of HTC's A11, a starter smartphone in the Desire line that reportedly uses the more modest (if respectable) 1.4GHz Snapdragon 410 for its 64-bit processing. Other elements are modest, too; you're looking at a 4.7-inch 854 x 480 screen, plain speakers (sorry, no BoomSound here) and both a 5-megapixel rear camera as well as a front 0.3-megapixel shooter. No great shakes, then, although hints of a Sprint launch suggest that you'll see it in the US. There's no word on when the A11 will ship, although it's believed to run the existing Sense 6 interface on top of Android 4.4 KitKat -- that suggests that HTC may deliver its first 64-bit phone well before its usual spring refresh.

In this article: 64-bit, a11, android, desire, htc, mobilepostcross, msm8916, smartphone, snapdragon410, sprint
All products recommended by Engadget are selected by our editorial team, independent of our parent company. Some of our stories include affiliate links. If you buy something through one of these links, we may earn an affiliate commission.